Go-Ahead customers in Cornwall can now benefit from up to 40 per cent reduced bus fares for a four-year period, as the government-backed pilot measures the significance of lower fares in stimulating bus usage across the county. 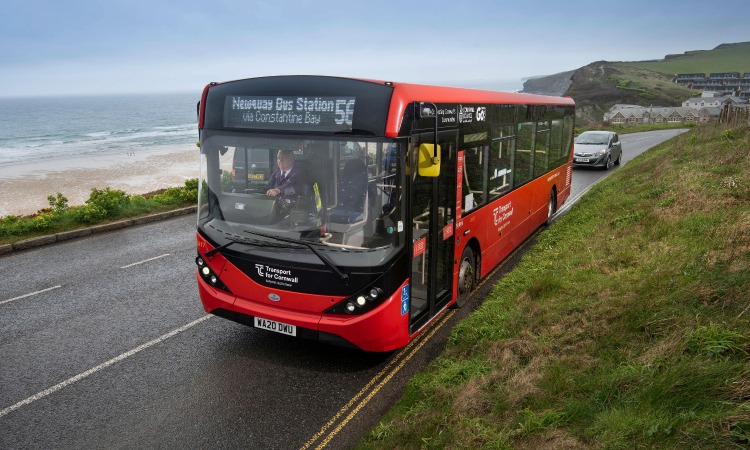 The Go-Ahead Group has announced that ticket prices on buses that it operates in Cornwall have been cut by up to 40 per cent under a government-backed pilot scheme, ‘Make Big Savings By Bus’, to persuade motorists to leave their private cars at home.

Launched on 10 April 2022, the four-year scheme will measure the extent to which lower fares can stimulate a change in travel behaviour by kick-starting growth in bus use, with Transport for Cornwall setting a goal of increasing bus usage by 10 per cent across the county.

The initiative, funded by Transport for Cornwall using a £23.5 million grant from the Department for Transport (DfT), stretches the length of Cornwall, from the River Tamar to the Land’s End peninsula, taking in towns and cities including Truro, Newquay, Redruth, Falmouth, Camborne, St Ives and Penzance.

Go Cornwall Bus is the county’s largest bus operator, operating over 100 routes and carrying 90,000 passengers per week. Go-Ahead has invested £25 million in rural transport services in the county since entering Cornwall in 2020.

The pilot scheme follows an “any ticket, any bus” initiative, making tickets interchangeable between Cornwall’s bus companies. It is consistent with goals under the UK government’s National Bus Strategy to encourage partnership working between operators and local authorities, and to promote the social, economic and environmental benefits of bus usage.

Baroness Charlotte Vere, the Buses Minister, said: “Backed by a £23.5 million government investment, we want to place Cornwall at the leading edge of a national bus revolution, which will underpin our drive towards net zero, increase connectivity between communities and provide relief at the ticket booth at a time when finances are tight.”

Mark Anderson, Go-Ahead Group’s Customer and Commercial Director, said: “With petrol prices soaring, this is a timely initiative aimed at persuading motorists to switch to buses in a largely rural part of England. It’s a win-win, both for locals all year round and for visitors, who will be able to take cheaper buses to Cornwall’s spectacular beaches this Summer [2022]. To become carbon neutral as a country by 2050, we need to encourage people to switch from car to bus. Investment in fares is a useful tool alongside bus priority schemes, flexible ticketing and digital payments to make journeys as swift and easy as possible.”

Steve Double, MP for St Austell and Newquay, said: “Cheaper bus journeys will help Cornish young people to get to school or college, and will make it easier to access jobs for those living in rural areas, something which can be a barrier to getting and keeping work for so many.”