With the first electric buses bearing the brand identity to begin operation from September 2023, plans are well underway to advance the delivery of Greater Manchester’s fully integrated, London-style transport system. 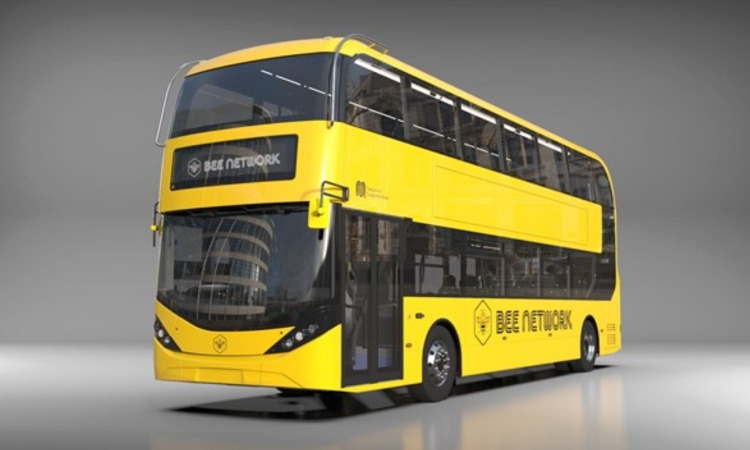 Greater Manchester Combined Authority (GMCA) has announced that a multi-million-pound order for 50 new double-deck electric buses has been placed with manufacturer Alexander Dennis. Powered by electric batteries and built in Britain, the new buses will produce zero local emissions, supporting Greater Manchester in building a sustainable future for public transport.

Due to operate across Wigan and Bolton from September 2023, the electric buses will be the first to bear the distinctive black and yellow branding of the new Bee Network, which Greater Manchester Mayor Andy Burnham revealed for the first time on 22 September 2022. The Bee Network is the city-region’s ambition for a fully integrated, London-style transport system comprising of buses, trams, walking, cycling, and eventually trains.

The new bus order and brand preview come as Transport for Greater Manchester (TfGM) confirmed receipt of 33 bids from operators vying to run the first locally controlled bus services in 36 years. The bids have come from nine different operators and relate to 11 different franchises that will operate across Wigan and Bolton from September 2023.

“The countdown to bringing buses back under local control for the first time in 36 years is well and truly on. With the order placed for our first 50 new electric buses and strong interest from operators who want to run the first franchised services a year from now, the Bee Network is gathering real momentum,” said Andy Burnham, Mayor of Greater Manchester. “Our vision for the Bee Network is bold and our case compelling, but is nothing more than our people deserve. In Greater Manchester we are leading the way when it comes to improving intra-city transport and connectivity between our villages, towns and cities.”

Alongside new and better infrastructure and services, ensuring that people feel safe when travelling on public transport and when using cycling and walking routes is equally as important in delivering the Bee Network – critical to the future success of the city-region.

This is why the TravelSafe Partnership (TSP) has agreed that it will become an ‘11th district’ of Greater Manchester, with significant resources committed to current and future enforcement, engagement and education activity. With its own dedicated policing unit and supported by transport staff, it will also now feature as part of Operation Avro – Greater Manchester Police’s (GMP) force-wide initiative which runs monthly to tackle criminal activity.

Currently around 60 per cent of trips are made by car and 40 per cent through more sustainable travel, such as public transport, cycling and walking. To support Greater Manchester’s ambition to make that split 50/50 by 2040 and with public transport use still some way below pre-pandemic levels, TfGM has launched its biggest ever campaign to get more people back on-board their local bus and tram service or consider a move to active travel.

The 50 new buses will be funded from the UK government’s City Region Sustainable Transport Settlement (CRSTS), with around 300 more electric buses to be delivered from 2024 through to 2027. A further 170 electric buses, funded from the Department for Transport’s Zero Emission Buses Regional Area (ZEBRA) scheme, will run in Stockport from 2024. The move will singlehandedly reduce carbon emissions by 1.1 million tonnes.

Councillor Andrew Western, Chair of Greater Manchester Transport Committee (GMTC) and clean air lead for the city-region, said: “The transformational Bee Network will be integrated and accessible, easy to understand and offer great value with capped daily fares and tickets. Not only will this be a significant step in improving bus services for passengers in Greater Manchester, with cleaner vehicles and better cycling and walking infrastructure it will accelerate our ambition to deliver a sustainable public transport system and become carbon neutral by 2038.”