Combined with the city-region’s ‘Our Pass’, Greater Manchester’s lower fares will provide its residents with certainty over the cost of travel and help ease the current cost-of-living crisis. 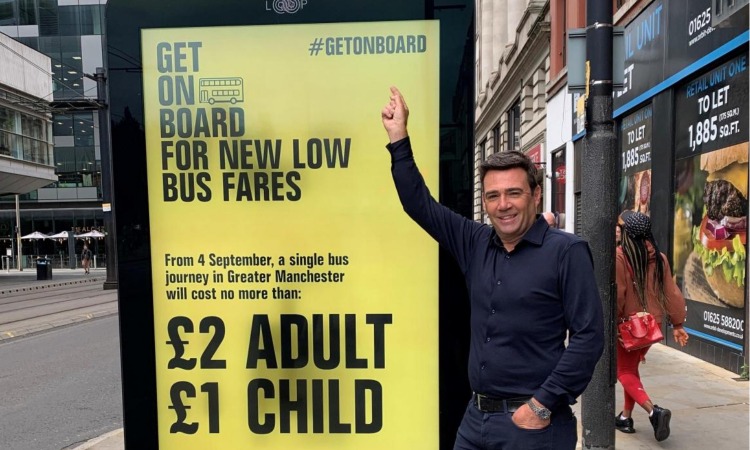 The Greater Manchester Combined Authority (GMCA) has announced that new lower bus fares will be launched across the region from September 2022. The plan for lower fares was brought forward by Mayor Andy Burnham and Greater Manchester’s (GM) leaders to help ease the current cost-of-living crisis.

The reduced fares will save bus passengers around 50 per cent on some journeys and is the biggest change to the region’s bus network since deregulation 36 years ago. With dozens of different ticket types available and costs varying by operator, it will provide certainty over the cost of travel for more than two thirds of people in the city-region concerned about the cost-of-living crisis.

Mayor of Greater Manchester, Andy Burnham, said: “The introduction of lower, simpler fares across our bus network signifies the biggest shake-up of our bus system in close to 40 years and comes at a critical time. Hundreds of thousands of households across Greater Manchester are deeply worried about money, with fears of even higher bills just around the corner. As the most used form of public transport, with around 2.5 million trips every week across the city-region, introducing lower fares for bus passengers is the best way we can help the most people with the cost of travel right now. Coupled with the extension of Our Pass, which provides free travel for 16 – 18-year-olds, we are taking steps to make an immediate and tangible difference to people’s lives by putting money back into their pockets.”

From September 2022, Greater Manchester’s new bus system will be supported by a package of local and national contributions. The move to lower fares is supported by UK government funding through the Bus Service Improvement Plan. However, the ending of COVID-19 funding in October 2022 means that the Mayor and GM leaders have had to step in to stabilise the city-region’s bus network by finding funding to save dozens of bus routes and services that were set to be withdrawn or reduced. £135 million of local funding has also been allocated to support the transition to bus franchising.

Given the considerable uncertainty over public transport funding going forward, the Mayor and Leaders have agreed to carry out an annual review of the new fare structure to ensure that it is financially sustainable.

Mayor Burnham said: “Bringing our buses back under public control is an essential step towards creating the Bee Network – our vision for a London-style integrated transport system. When fully operational in 2025, we will extend the daily cap on fares to cover bus and tram. But we will only be able to make the Bee Network what we all want it to be if people support public transport by committing to use it as it improves.”