Sustrans Scotland’s new report evaluates how successful the Spaces for People programme has been in increasing active travel across the country, as well as highlights key learnings and recommendations that can be taken forward. 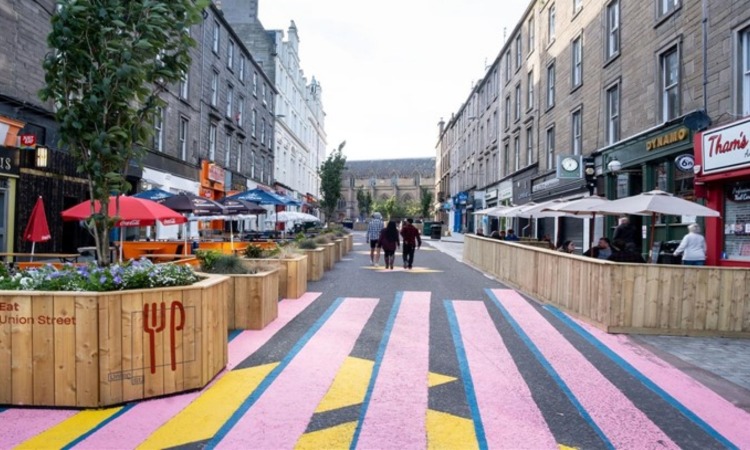 Sustrans Scotland has announced that it has released reports providing insight on the extent to which the Scottish government’s active travel programme, Spaces for People, has achieved its overall aims, as well as how those with protected characteristics have been impacted by the scheme.

Funded by the Scottish government and managed by Sustrans Scotland, the programme had been launched at the start of 2020, early in the COVID-19 pandemic, to enable people to make essential journeys and exercise during lockdown. The £33 million fund was made available to local authorities and other statutory bodies to introduce temporary infrastructure across Scotland.

In total, 30 local authorities, three NHS trusts and Tayside and Central Scotland Transport Partnership (TACTRAN) took part in the programme, with each delivering their own projects. Together, this resulted in the implementation of 1,298 interventions over a two-year period – an unprecedented rate of delivery within the sector.

The infrastructure improvements had been introduced to protect public health and alleviate the effects of lockdowns. Short-term measures included widened pavements, pop-up cycle lanes and reduced speed limits. These interventions allowed people to physically distance more easily, and offered them safe access to essential services, such as healthcare, food and education, without the need for public transport.

Findings show that walking and cycling increased across Scotland while temporary measures were in place. The reports also show that public reception of the programme was generally more positive than negative.

In addition, a key success of the programme is the large number of temporary Spaces for People measures which have contributed to longer-term plans or new active travel projects locally. This includes the closure of the Kelvin Way in Glasgow to motor traffic, and the people first pedestrianisation of Union Street in Dundee that has benefitted many local businesses.

Whilst the broader aims of protecting public health and facilitating essential journeys during the pandemic have largely been met, a number of key lessons have also been taken from the delivery of the programme. Lack of availability of materials early in the pandemic meant that local authorities often had to rely on poorer quality and visually unappealing materials, such as traffic cones, to deliver temporary measures. This had later been rectified in some areas through the use of more welcoming fixtures, such as wooden community planters.

Feedback also highlighted that improved engagement with disability groups to address their concerns, could have increased the overall success of the scheme. The learnings from the research will now be fed into a process of learning and continuous improvement over the coming months, through a series of engagement sessions and workshops with delivery partners.

Patrick Harvie, Minister for Active Travel said: “These welcome reports from Sustrans Scotland show that many of the Scottish schemes have been successful and local authorities are choosing to make them permanent. At the same time, delivering schemes swiftly and at scale, raised issues that we can all learn and build on as we consider new permanent infrastructure. The active travel landscape has improved much since Spaces for People was first announced.”

Karen McGregor, Sustrans Scotland Director said: “Spaces for People was an enormous undertaking during what was an unprecedented time for all of us. We are immensely proud of the successes it has achieved. The temporary measures delivered through the programme ensured people across Scotland could safely distance from one another when making necessary journeys to key workplaces, schools, supermarkets and healthcare sites.”