After securing £80 million per year for walking and cycling schemes, as part of its long-term funding agreement with the UK government, TfL will restart work on paused projects to make London’s streets safer and greener. 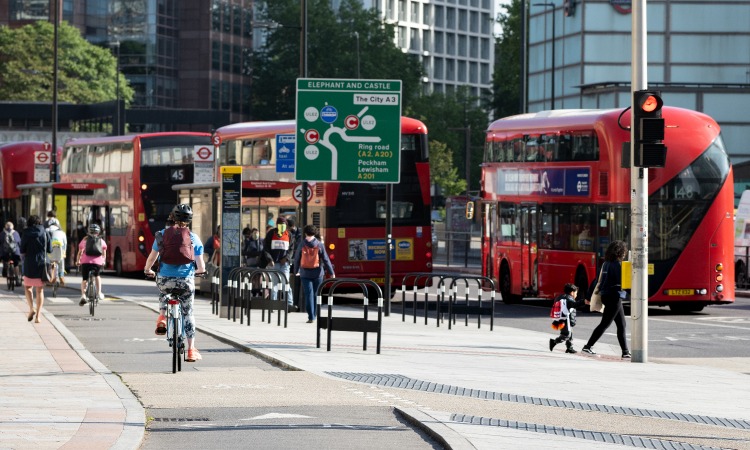 Transport for London (TfL) has announced that it will restart work on paused schemes to make the UK capital’s roads safer and more attractive for those walking and cycling, following vital investment being secured as part of the latest funding agreement with the UK government.

Due to due to successive short-term agreements, TfL had to pause some of its investment in walking and cycling schemes.  Following negotiations, in August 2022, TfL reached an agreement with the government on a funding settlement until 31 March 2024. It can now resume spending on vital projects, with £80 million per year to be spent directly by TfL on walking and cycling schemes as part of its Healthy Streets Programme.

These schemes will continue to support a green recovery from the pandemic, and create opportunities for safe, active and sustainable travel on London’s streets, supporting the Mayor’s Vision Zero goal of eliminating death and serious injury from the transport network.

This includes the start of construction of safer junction schemes at Holloway Road/Drayton Park and Battersea Bridge (subject to consultation), and pedestrian and cycling improvements at Streatham High Road and Manor Circus. In addition, TfL will also continue lowering speed limits across London to reduce road danger, with plans to introduce a 20mph speed limit on a further 28km of roads in the boroughs of Camden, Islington, Hackney, Tower Hamlets and Haringey by March 2023.

As part of the next phase of the Healthy Streets programme, TfL will also complete cycleways currently under construction and begin the construction of up to 14km of additional sections, as well as continue the design of a further 16km of cycleways.

Contributing to the target of building 25km of new bus lane by March 2025, £12.8 million will also be provided to London’s boroughs as part of the LIP Bus Priority Programme to deliver bus journey time improvements.

In total, £69 million annual funding has already been allocated to the capital’s boroughs to restart work on schemes to make London’s transport network safer, greener and more sustainable. As part of this funding, a further £9.8 million in 2022/23 and £11 million in 2023/24 will be provided to the boroughs as part of the Cycle Network Development programme.

London’s Walking and Cycling Commissioner, Will Norman, said: “With the funding now agreed, I’m delighted that we can now restart work on these vital schemes - as well as beginning the design work for the next generation of new projects.”

Penny Rees, TfL’s Head of Healthy Streets Investment, said: “Investment in high-quality walking and cycling infrastructure, as part of our Healthy Streets programme, will continue to be vital to a green, healthy and sustainable future for all Londoners. The £69 million per year of direct borough funding will also support more localised investment in walking, bus priority and cycling schemes across the city.”