First Bus’s completed depot will allow 150 electric vehicles to be charged at one time, supporting its growing electric fleet in Glasgow, as well as other businesses during the day when its buses are out on service. 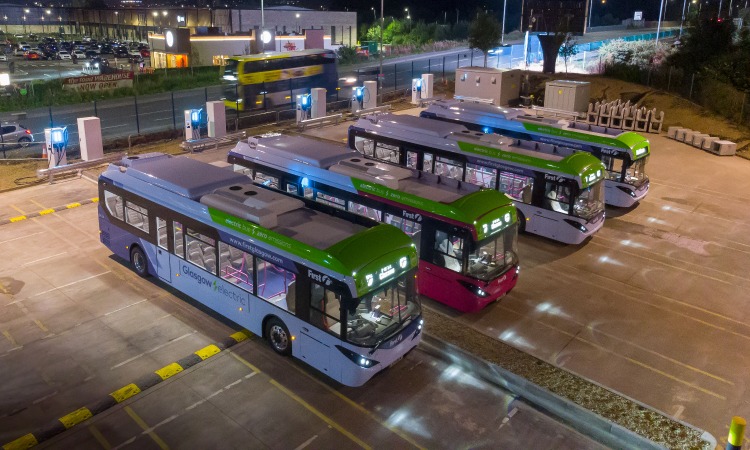 First Bus has announced that Glasgow is now home to the UK’s largest electric vehicle (EV) rapid-charging centre as it completes the major transformation of its flagship Caledonia depot. In order to mark the completion of works, Scottish Transport Minister, Jenny Gilruth, visited the site on 25 May 2022.

The Caledonia depot, located in Glasgow’s southside, has had 160 state-of-the art, rapid-charging points installed over the last nine months, which will allow 150 EVs to be charged at the depot at one time.

In addition to supporting First Bus and its growing electric fleet in Glasgow, the depot will also help other organisations operating in the city to decarbonise their own fleets. Therefore, First Bus is trialling the use of its charging infrastructure to third-party businesses during the day when its buses are out on service.

The bus company now plans to expand the depot further, in partnership with Ofgem and Scottish Power Energy Networks, with the construction of a new substation. This will supply enough power to host an additional 200 vehicles and charging points and will see the Caledonia depot home to a total capacity of 350 charging points once built.

Scottish Minister for Transport, Jenny Gilruth, said: “I am delighted to visit the depot to see the scale of what the largest D.C. charging centre in the UK is now, which has been made possible by £26.3 million of Scottish government investment. This really is a gamer changer in our progress towards decarbonising Scotland’s buses.

First Glasgow: Transformation at Caledonia and beyond

Duncan Cameron, Managing Director at First Bus Scotland, said: “We’re proud to enable more Glasgow companies to realise their own paths to zero emissions, too. With the great range of our new EVs, and the immense power of these new charging stations, our buses only need to stop to be charged overnight, allowing us to free up the depot during the day for other electric fleets in and around Glasgow”.

The depot’s new rapid-charging stations can fully charge a bus in just four hours if required and will be controlled via a smart-charging software. This will ensure that power is used in the most efficient way – minimising the draw-down from the National Grid at peak times. First Bus plans to replicate this model across many more sites as part of its decarbonisation journey.

More electric vehicles will soon be coming to Glasgow and further afield, too, with First Bus successful in the Scottish government’s ScotZEB funding round. Fifty new electric buses are now planned for First Glasgow’s Scotstoun depot, and First Aberdeen’s zero-emission fleet will be bolstered with an additional 24 electric vehicles.

Furthermore, First Bus and its local authority partners in five regions across England have been successful in their bid to secure UK government funding for new electric vehicles through the Zero Emission Buses Regional Area (ZEBRA) scheme.