With this investment, EMT Madrid makes considerable progress in the construction plans of its hydrogen refuelling plant for public transport in Madrid – accelerating the decarbonisation of the municipal’s public transit fleet. 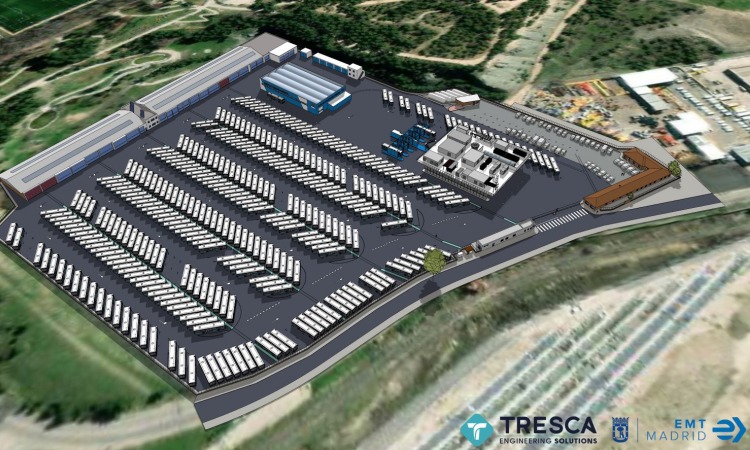 The Empresa Municipal de Transportes de Madrid (EMT Madrid) has announced that it has awarded a total of €10.86 million for the drafting and execution of its project to build a hydroelectric plant, and the required photovoltaic installation that will supply it, at the Entrevías Operations Center in Madrid.

The new refuelling station will provide several green hydrogen re-charging stations for the fleet of 10 buses that EMT Madrid plans to acquire during the first phase of the project. The project involves the commissioning of the necessary facilities for the production, storage and distribution of hydrogen. It also includes the installation and commissioning of photovoltaic panels capable of generating all the energy necessary for the production of hydrogen from renewable sources.

Of the total amount of the investment, €10.2 million will be provided for the execution, nearly €238,000 will be provided for the drafting of the project and over €369,000 will be allocated for the maintenance service. This action is financed by the European Union and for the first time, EMT Madrid has obtained access to the European Regional Development Fund (ERDF), which means an additional financing of €2.9 million.

EMT Madrid has been a pioneer in utilising alternative fuels such as hydrogen, and was the first Spanish transport operator to test the operation of hydrogen-powered fuel cell buses in 2002, through the CityCell and HyFleet:CUTE community projects.

In 2020, the municipal company once again considered the advantages of using hydrogen as fuel and signed a strategic alliance with the National Hydrogen and Fuel Cell Center (CNH2), with the aim of promoting the development and implementation of hydrogen technologies. The CNH2 is a national research space aimed at promoting research into hydrogen and fuel cell technologies.

In line with both the new EMT Madrid Strategic Plan, which will govern the course of the organisation until 2025, and the Madrid 360 Environmental Strategy, this project will help accelerate the decarbonisation of the city’s public transit fleet. To further achieve this, in December 2022 diesel-fuelled vehicles will be withdrawn and the municipal fleet will only consist of electric and natural gas buses.