The need for alternative power vehicles within the public transport industry has never been greater, as operators and authorities across the globe look to reduce emissions by operating in a ‘cleaner and greener’ way. Here, SunLine provides Intelligent Transport with exclusive insight into its 30-years-in-the-making commitment to removing diesel from its operations and shares what it intends to do in order to continue providing environmentally responsible public transportation. 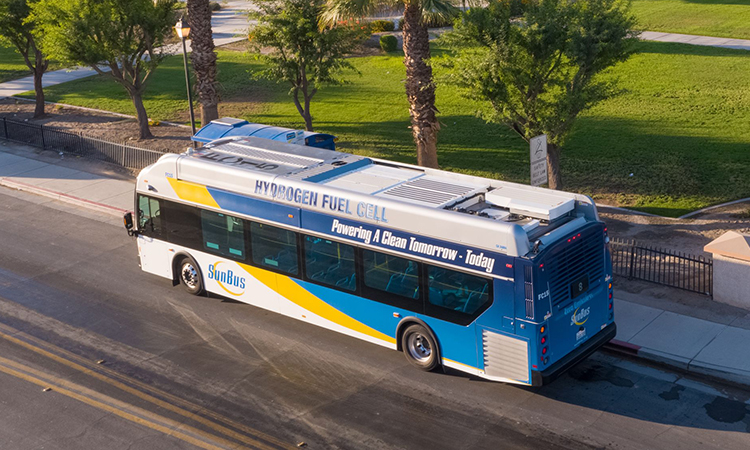 Hydrogen is propelling SunLine Transit Agency (SunLine) in many more ways than simply as a fuel source. SunLine – a public transit agency that services California’s Coachella Valley region, spanning a 1,120 mile-service area and carrying approximately 4.2 million riders – is known as a pioneer in hydrogen technologies, stemming back nearly three decades.

Since the early 1990s, SunLine has pursued an aggressive strategy for incorporating clean technologies into its operations. The agency took action to replace its entire fleet almost overnight, from diesel engines to cleaner burning compressed natural gas (CNG) in 1993, when its Board of Directors adopted a voluntary policy of pursuing alternative fuel solutions that provide the lowest possible emissions.

Since the early 1990s, SunLine has pursued an aggressive strategy for incorporating clean technologies into its operations”

On 6 May 1994, 40 brand new buses fuelled by clean CNG rolled onto the streets of the Coachella Valley – making SunLine the first transit agency in the state to convert its entire fleet to CNG. This was a huge investment, exemplifying the agency’s commitment to clean air and greenhouse gas (GHG) emission reduction.

Fast forward six years to the year 2000, SunLine earned its place in history with the development of hydrogen-fuelled vehicles, beginning with the Xcellsis H2 Hydrogen Fuel Cell zero-emission bus – or ZE Bus. This was the dawn of state-of-the-art zero-emission technology that would revolutionise the future. Since then, the transit agency has developed several generations of hydrogen-electric fuel cell buses, each of which has showcased its own unique advancements in zero-emission technology.

In 2003, the agency put into service the first hydrogen fuel cell bus in the world to incorporate hybrid electric technology”

In 2003, the agency put into service the first hydrogen fuel cell bus in the world to incorporate hybrid electric technology. With the launch of SunFuels in 2006, SunLine took ownership of its two fuelling stations, becoming the first-ever transit agency in the U.S. to own and operate a natural gas and hydrogen generation dispensing station.

The milestones continued in 2010, as SunLine launched a fuel cell bus known as the FC2, a prototype for an entirely new hydrogen bus model and the basis for 20 additional buses built for the 2010 Winter Olympics. The next year, the American Fuel Cell Bus was introduced as a first-of-its-kind all-American-made fuel cell bus. This introduction enabled transit agencies across the country to purchase a 40-foot fuel cell bus that met the FTA’s ‘Buy America’ requirements – paving the way for further commercialisation of hydrogen fuel cell vehicles.

While SunLine is proud of its strides in the development of hydrogen technology, the positive effects of these advancements in the lives of the communities that we serve are what matter most. When it comes to environmental equity, underserved communities have historically not been afforded the same access to clean air as those who are able to live in less industrial areas or far from busy roads. Therefore, all of the zero-emission buses that have been deployed are pivotal to the realisation of air quality impacts.

With additional arrivals of New Flyer Xcelsior hydrogen fuel cell buses in the past year, SunLine’s fleet now incorporates 21 hydrogen fuel cell vehicles, and five more are scheduled for delivery in Summer 2022. These deliveries will keep the agency on track to be fully transitioned to zero-emission by 2035 – five years ahead of the 2040 deadline set in the California’s ICT Regulation (2040). In addition, the fleet incorporates four battery electric buses and 60 CNG buses.

However, being at the forefront of building a clean fuel fleet is only half of SunLine’s hydrogen story. Producing hydrogen is as critical as the vehicles being powered by green hydrogen. It’s a full-circle approach that is crucial to the success of an agency focused on sustainable initiatives throughout all facets of its operations – including solutions for green electricity. That’s why SunLine is not just reducing tailpipe emissions, but is also instituting a multi-year solar project to create renewable energy with the creation of a micro-grid.

The importance of infrastructure

SunLine’s growing hydrogen fuel cell fleet is made possible by an ongoing investment in onsite infrastructure, including the largest hydrogen fuelling station dedicated to transit in the U.S., the PEM Hydrogen Electrolyzer.

SunLine’s growing hydrogen fuel cell fleet is made possible by an ongoing investment in onsite infrastructure, including the largest hydrogen fuelling station dedicated to transit in the U.S.”

The Electrolyzer allows SunLine to manufacture its own hydrogen production, using electricity and renewable energy to generate clean hydrogen, offering a bundled fleet and fuelling solution that paves the way for and accelerates mass adoption of fuel cell buses and trucks in fleet operators. This, in turn, drives down the total cost of ownership of fuel cell bus and truck fleets – making it an impactful programme for propelling long-term reductions in carbon footprints and GHGs on a global scale.

The agency plans to add a new liquid hydrogen station that will include liquid storage, a vaporizer, compression equipment, gaseous storage and dispensing equipment. It will also provide both capacity and resiliency for existing and future fuelling infrastructure alongside the Electrolyzer. Together, the Electrolyzer and liquid hydrogen station will be capable of fuelling 57 fixed route fuel cell electric buses and 39 paratransit fuel cell electric buses. The completed station is expected to be operational by the end of 2023.

The benefit of industry partnerships

Partnerships are key in cutting edge technology, and one example is SunLine’s collaboration with NICE America Research. This group has developed a mobile refuelling system that uses liquid H2 pump technology. The system is expected to simplify the process of deploying infrastructure hydrogen fuel cell vehicles for transportation purposes. The NICE America system can refuel hydrogen fuel cell buses in about the same time needed to refuel conventional diesel-powered buses, and also has the long-term potential to reduce operating costs to diesel parity. The portable nature of the refuelling system reduces the time needed to set up fuelling infrastructure, while offering flexibility to reposition to new locations once permanent infrastructure is built. SunLine piloted this system at its Indio facility from October 2021 to February 2022. 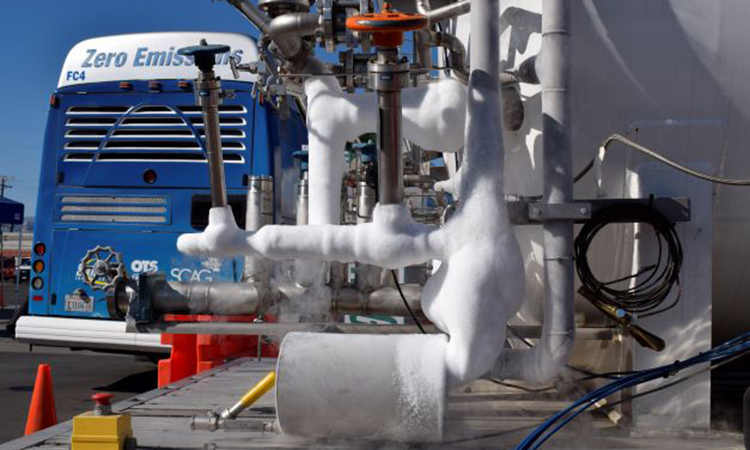 Another partnership with Southern California Gas Co. will introduce ground-breaking technology that produces hydrogen from renewable natural gas at SunLine’s hydrogen fuelling station. The research project, called “H2 SilverSTARS,” will produce renewable hydrogen to fuel SunLine’s fleet of hydrogen fuel cell electric buses and support further expansion. The combination of new technologies will allow clean hydrogen, made from renewable natural gas, to be provided at any location near a natural gas pipeline, with the goal to produce emission-free renewable hydrogen for fuel cell electric cars and other vehicles at a price competitive with gasoline. This project is currently being developed and is projected to break ground in March 2022.

Funding the future of clean air

For almost 30 years, SunLine Transit Agency has played a vital role in the development of zero-emission and hydrogen fuel technologies… SunLine will continue to do its part to provide environmentally responsible public transportation”

Over the past ten years, SunLine has received more than $27 million in grants, from agencies including the California Air Resources Board (CARB) and the Federal Transit Agency (FTA). These funds have been deployed, in part, to help to purchase the zero-emission vehicles and equipment necessary to produce hydrogen. By modelling zero-emission and hydrogen solutions for other small to mid-size systems, SunLine has garnered grant support and secured other funding programmes that continue to help expand its zero-emission programme.

The agency already sells compressed natural gas to commercial and government agencies, and plans to sell hydrogen in the future, as well.

For almost 30 years, SunLine Transit Agency has played a vital role in the development of zero-emission and hydrogen fuel technologies, and is recognised worldwide for its contributions to the transit industry. SunLine will continue to do its part to provide environmentally responsible public transportation and help to ensure that natural resources are preserved, safeguarding clean air for future generations.

SunLine Transit Agency provides public transit services in California’s Coachella Valley, spanning a 1,120 mile-service area and carrying approximately 4.2 million riders. It has pioneered zero-emission bus deployments, particularly for hydrogen fuel cell electric buses (FCEB). In 1993, SunLine’s Board adopted a voluntary policy of pursuing alternative fuel solutions that provide the lowest possible emissions, which led it to become the first transit agency in the state to convert its entire fleet to compressed natural gas (CNG). SunLine is committed to transitioning its entire bus fleet to zero-emission by 2035.