TMB’s new zero-emission bus is fuelled with approximately 20kg of hydrogen per day, from a newly launched supply plant in Zona Franca, and is the first of eight hydrogen buses set to be launched in the country. 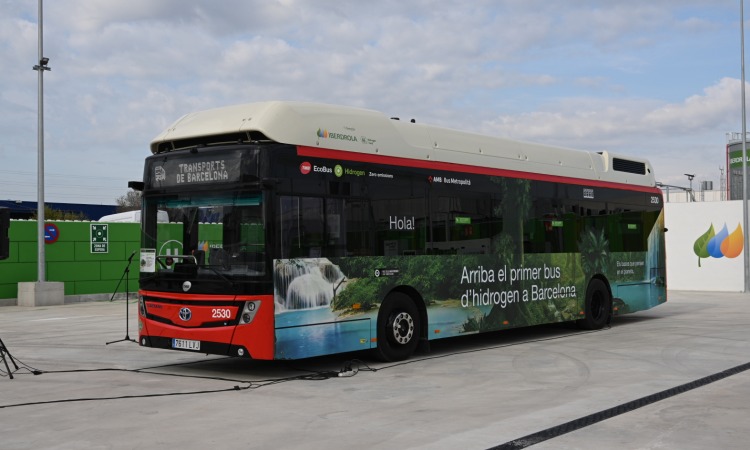 Transports Metropolitans de Barcelona (TMB) has announced that it has put into service the first hydrogen bus to be integrated into Spain’s public transport network. The new, ‘green’ bus will provide service on the X1 line – the XPRESBus semi-direct service that connects the city centre with the Francesc Macià i Glòries intermodal nodes.

The innovative zero-emission vehicle is the first of eight state-of-the-art hydrogen battery buses built by CaetanoBus to be loaded at the Iberdrola plant in Zona Franca, and is the first time that this type of alternative fuel has been generated in the country for commercial use, with capacity for fleets.

This new launch puts TMB on track to achieve the goals set out in its 2025 Strategic Plan, which outlines the incorporation of 508 clean energy buses in its public transport fleet, of which 233 will be electric and 46 hydrogen.

“This is an important step in the fight against climate change that we are doing from Barcelona and from TMB,” said President of TMB, Laia Bonet. “We are moving towards a fleet of sustainable vehicles.”

Following the hydrogen bus’s arrival in January 2021, the vehicle has been undergoing testing without passengers until its official launch in early April 2022. The bus only emits water vapour and is fuelled with approximately 20kg of green hydrogen per day, from the supply plant located in the industrial estate of Zona Franca.

The start-up of the Zona Franca hydrogen plant, which has been running in a record amount of time of less than one year, will allow the creation of a green hydrogen hub in one of the most important industrial areas in Spain. In addition, the installation will supply other fleets and industries that decide to adopt this type of energy.

A standard bus size, the new zero-emission hydrogen vehicle is 12m long and has a lightweight, three-door aluminium body. The hydrogen system incorporates Toyota’s fuel cell with 60kW of rated power, and five Type 4 hydrogen tanks with a total storage capacity of 37.5kg of hydrogen.

▶ National coalition to advance the development of hydrogen fuel cell buses formed in the U.S.