As part of the trial, customers will be invited to try the new bridging device at eight Jubilee line stations until February 2023 – including London Bridge, Canary Wharf and Green Park. 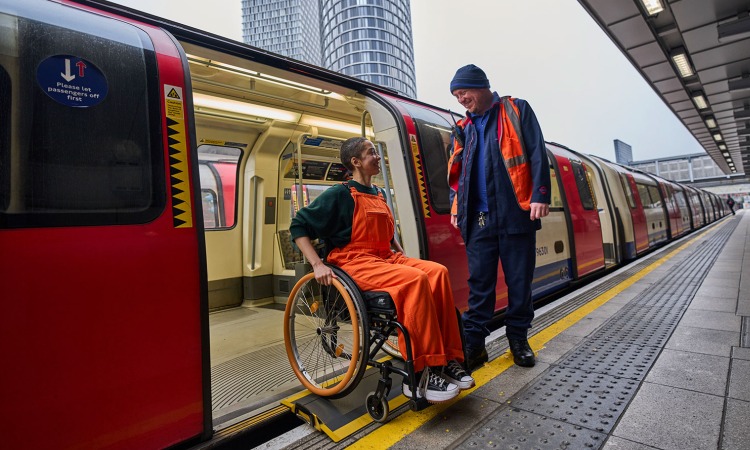 Transport for London (TfL) has announced that it has published the results of its step-free access consultation, as it launches a trial of a new bridging device as part of its ongoing work to make the capital’s train network more accessible and inclusive.

The specially commissioned bridging device has been designed to provide additional support, comfort and reassurance to customers at step-free stations where there remains a small gap between the platform and train carriage.

Customers will be invited to try the new bridging device at eight Jubilee line stations until February 2023 – including London Bridge, Canary Wharf and Green Park. Customers can just turn up at any one of the stations in the trial to request to use the bridging device and station staff will be able to deploy the device. They are also available to assist customers wanting to get off the train at one of the trial stations, by requesting for a member of staff to be waiting with the device.

The bridging device is the same width as the boarding ramps already in extensive use across the network but is only 200mm in length. Customers who have used the device are invited to provide comments about their experience including suggesting a name for it.

If the trial is successful, TfL will consider extending the use of the bridging device across the London Underground and wider TfL network as it continues working to make the capital’s network more accessible and inclusive.

In order to better inform its accessibility plans, TfL ran a 14-week public consultation from November 2021, looking into how it could best shape the future of step-free access on the Tube when suitable funding is identified.

More than 5,500 people took part in the public consultation, with the headline responses including that 66 per cent of public respondents would use the Tube more if there were more step-free stations. In total, 880 people who had completed the consultation said that they do not currently use the Tube, but 80 per cent of these said that they would use it if it was more accessible to them.

Mark Evers, TfL’s Chief Customer Officer, said: “Making our transport network more accessible and inclusive is a top priority for us, as we know that a more accessible public transport network benefits everyone. The response to the consultation shows how important accessibility is for encouraging more people to use public transport. The bridging device has been designed to improve customers’ confidence and experience of using the network and I hope as many people as possible try it out during the trial period.”

Seb Dance, Deputy Mayor for Transport said: “This new trial is one example of how we are seeking out innovative solutions to enhance step-free access. It is also vital that our accessibility plans are informed by disabled and older customers and I am delighted that we have had such a great response to the consultation. I’m pleased that there are now more than 200 step-free stations across the TfL network are step-free and with the recent opening of Bond Street station, all 41 Elizabeth line stations have step-free access, with the majority of central stations on the line being step-free from street to train. There is still work to do, and we will ensure that this feedback shapes how we prioritise and deliver step-free stations into the future.”