In addition to building new cycling paths, LTA will also be implementing the supporting infrastructure, such as bicycle parking facilities, in order to accelerate and improve active travel connectivity in Singapore. 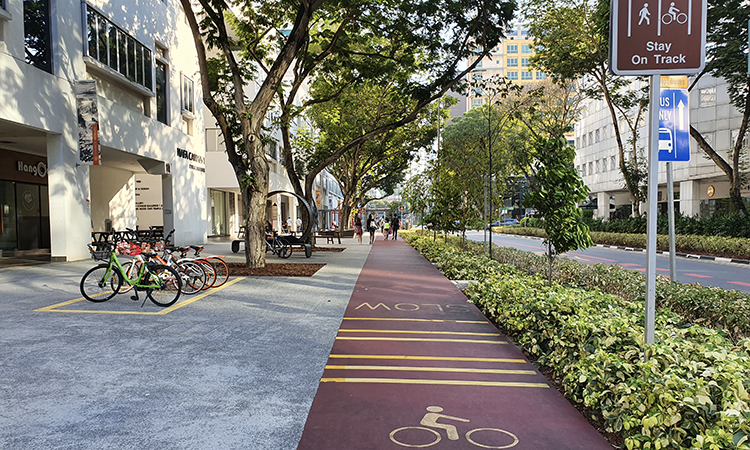 The Land Transport Authority (LTA) has announced that new cycling paths will be built in seven towns under the next phase of its Islandwide Cycling Network (ICN) programme.

Residents and active mobility users in Geylang, Hougang, Kaki Bukit, Marine Parade, Potong Pasir, Sengkang and Serangoon can now look forward to having more comprehensive cycling path networks, which connect them to key amenities such as transport nodes, neighbourhood centres and schools in their neighbourhoods, as well as improved cycling links between towns when these projects are progressively completed from 2024.

LTA has called for a tender for the construction of the new cycling paths. In order to cater to the planned infrastructure, existing footpaths are expected be widened to create more space for walking and cycling.

Due to space constraints in these mature, built-up towns, re-purposing of road space and adjustments to facilities, such as drains, bus stops and staircases, may also be needed. LTA will work closely with other agencies to assess the technical feasibility for these options and engage other relevant stakeholders ahead of any changes.

Unveiled in 2020, the ICN programme aims to accelerate and improve active mobility connectivity and infrastructure across Singapore and expand the country’s cycling path network to span some 1,300km by 2030. When realised, this will allow eight in 10 Housing and Development Board (HDB) residents to be within minutes of their nearest cycling path network, to support green commutes by Walk, Cycle and Ride.

Over the past two years, LTA has made steady progress towards achieving this target despite challenges brought on by the pandemic. More than 30km of cycling paths have been recently completed in six towns across Singapore, expanding the network to more than 530km.

In addition, inter-town active mobility connectivity has also been improved. For example, by connecting existing park connectors, cyclists can now cycle to the city from Geylang via the Geylang Park Connector and from Ang Mo Kio via the Kallang Park Connector.

Furthermore, LTA will also continue with its education and outreach efforts to foster a safe and responsible active mobility culture in tandem with the infrastructural enhancements.