Residents in Tampines Avenue 1, 4, 5 and 8 can now enjoy safer active mobility, as the addition of 4km of cycling paths has enhanced safety for pedestrians and cyclists, while linking them to key amenities and green spaces. 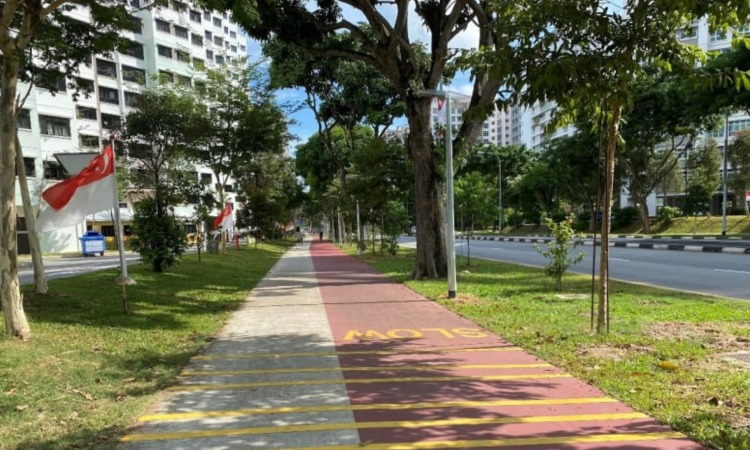 The Land Transport Authority (LTA) has announced that it has launched 4km of cycling paths in Tampines, Singapore – allowing residents to better enjoy active mobility connectivity as the new, improved cycling lanes link them to major amenities within the town.

Safety markings and speed regulating strips have been implemented along the new paths to remind active mobility device users to ride safely and to keep a look out for other path users. The cycling paths also have a distinctive red coating to clearly distinguish them from footpaths.

Furthermore, five pedestrian crossings along the cycling routes have been widened to enhance safety for both pedestrians and cyclists. Coupled with the existing 19 bicycle crossings, cyclists can now enjoy a safer and more seamless cycling experience in Tampines.

With the launch of these new cycling paths, LTA – along with the Housing Development Board, National Parks Board, People’s Association and Tampines Town Council – have now completed 25km of cycling paths and park connectors in Tampines.

Improvement works have also been carried out to create space for cycling paths behind 13 bus stops in Tampines to improve safety for both cyclists and bus commuters. LTA will continue to work with other agencies to further expand the Tampines cycling path network.

Under its Islandwide Cycling Network programme (ICN), LTA will expand cycling path connectivity to around 1,300km by 2030. Besides the new paths in Tampines and the recently launched ones in Taman Jurong, new paths are progressively being built and completed in other towns, as well, to allow more to embrace active mobility and enable greener and healthier commutes.