Since being launched in January 2022, Cardiff Bus’ new electric bus fleet has saved over 500,000 tonnes of CO₂ from being released into the atmosphere. 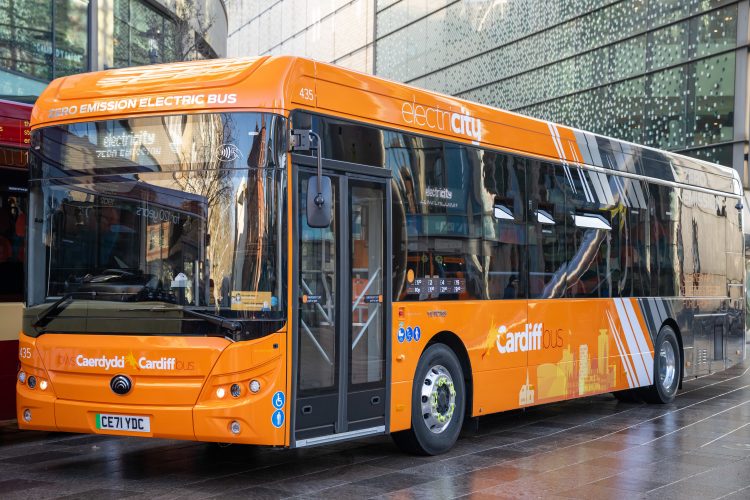 Cardiff Bus has announced that its fleet of 36 electric buses have saved over 550 tonnes of carbon dioxide from the atmosphere since being launched at the start of the year.

The bus operator has released the figures hoping to encourage local people to take the bus to help save the environment.

Since taking to the roads in January 2022, the new zero-emission single-decker buses have clocked up 714,322km in operation and have saved an impressive 558,000 tonnes of CO₂ from being released into the atmosphere.

The achievement marks a significant stride forward for Cardiff Bus as it works towards reducing its emissions and air pollution in the Welsh capital.

Alongside the introduction of the new electric vehicles, the bus operator has retrofitted 20 of its enviro200 buses from Euro V emission standards vehicles to Euro VI emissions standards, currently the cleanest diesel technology available.

The steps being taken by Cardiff Bus to upgrade its engine technology, along with its move towards electrifying its fleet, will make further advancements towards tackling air pollution in the city centre and providing greener transport in Cardiff.

Bus travel is one of the greenest modes of travel, currently accounting for only 6 per cent of emissions in comparison to cars which account for 71 per cent. In addition, bus travel alleviates pressure on roads during peak times, with one bus replacing between 30 and 40 cars on the road.

Gareth Stevens, Commercial Director at Cardiff Bus, said: “Electrifying our fleet not only keeps our city moving but does so in a green and environmentally sustainable way. To reach 500 tonnes of carbon dioxide savings is a significant milestone. It is a credit to Cardiff City Council and our customers who have embraced this new technology so readily. We’re extremely proud to be a part of the movement to tackle air pollution and will continue to strive to make sustainable transport the future for mobility in the city.”