The UK government has introduced new powers allowing TfL and London boroughs to fine motorists who infringe on cycle lanes, like they currently do for bus lanes and yellow box junctions, from 27 June 2022. 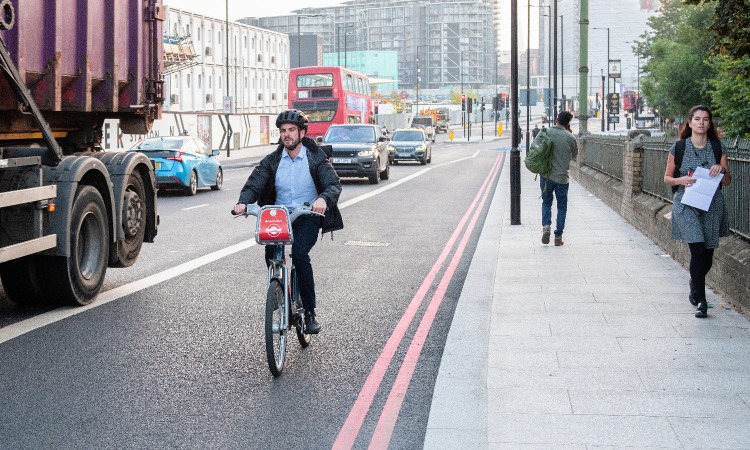 Transport for London (TfL) has announced that it will begin issuing fines to vehicles that drive within, or cross, the white lines of cycle lanes that are marked by a solid white line and cycle tracks on TfL’s Road Network (TLRN) from 27 June 2022.

Cycle lanes play a vital role in keeping people cycling separated from most motor traffic, reducing the risk of collisions, which can cause death and serious injury. Reducing non-compliance will help improve safety and the confidence of cyclists as part of TfL’s Cycling Action Plan and Vision Zero goal of eliminating death and serious injury on the road network.

The UK government has introduced new powers allowing TfL and London boroughs to fine motorists who infringe on cycle lanes and cycle tracks in the same way that they currently do for bus lanes and yellow box junctions. These powers have been introduced at the same time as wider national changes giving local authorities in England outside of London the powers to enforce moving traffic contraventions. Initially, TfL will use existing CCTV cameras to enforce contraventions in cycle lanes and cycle tracks at key locations across its road network.

Road danger remains a barrier to people walking and cycling more, with more than half of Londoners choosing not to cycle because of concerns over road traffic. Thus, the new enforcement powers will help protect designated space for cyclists and make the capital’s roads more attractive for Londoners to cycle on, helping to build on the huge increases in cycling seen in the capital since the start of the COVID-19 pandemic.

Siwan Hayward, TfL’s Director of Compliance, Policing, Operations and Security, said: “We welcome the introduction of the new enforcement powers in London. Protecting designated space for cyclists is essential in keeping them safe and improving confidence to cycle. We will start enforcing in key locations in London to deter drivers contravening the road rules. We want to ensure a green and sustainable future for London, and to do this we must continue to make walking and cycling round our city safe and accessible to all Londoners.”

Will Norman, London’s Walking and Cycling Commissioner, said: “Making London’s streets safer is our top priority. These new enforcement powers will deter motorists from infringing on crucial space specifically designated to keep cyclists safe and will help improve cyclist’s confidence when getting around the capital.

Mayor Philip Glanville, London Councils’ Climate Change, Transport and Environment Lead, said: “Dangerous driving is directly linked to more incidents on London’s roads and every death or serious injury is unacceptable. London boroughs continue to lobby for, and welcome expanded civil powers on enforcement as a step in the right direction towards achieving our goals for Vision Zero and making London safer for all road users.”

TfL continues to work closely with local boroughs to create space for cycling across the city. This includes building a strategic network for cycling in London, transforming town centres and reducing traffic on residential streets. Since May 2016, 260km of cycle routes have been delivered and the need to create space on London’s roads for walking and cycling has become even more important since the COVID-19 pandemic began, with record numbers of Londoners walking and cycling to make essential journeys.