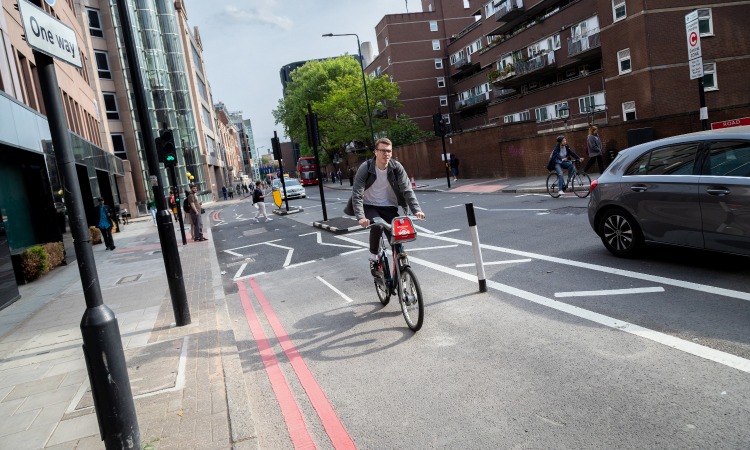 Transport for London (TfL) has announced that it has completed work on a new protected cycle route in East London, which will enable thousands of safer cycling journeys across the capital each week. The new route will also help to build on the huge increases in cycling seen in London since the start of the COVID-19 pandemic.

Work has been completed on Mansell Street in Aldgate, to connect two major existing cycleways on London’s network of routes – Cycleway 2 and 3. Changes that have been put in place as part of the work include:

In the three years up to July 2020, four people were seriously injured in collisions on or near Mansell Street and one person was tragically killed. These changes will help to make people who cycle feel safer along the cycling corridor, which is in the top five per cent for current and future cycling demand in London.

Will Norman, London’s Walking and Cycling Commissioner, said: “We’ve seen a huge rise in walking and cycling over the past two years as more and more Londoners enjoy using sustainable ways to get around the capital. To maintain this success, we are continuing to make our roads safer. I’m delighted that this new protected cycle route is now open, making a much-needed connection between two major cycleways in East London.”

Nick Fairholme, TfL’s Director of Project and Programme Delivery, said: “Walking and cycling are absolutely essential to a more sustainable future for London and we know that there has been huge demand for cycling since the start of the pandemic. We’re determined to ensure that all Londoners have access to safe cycling routes and this new link between two major cycleways will make a big difference to people cycling in East London and beyond. We’ll continue to work with the capital’s boroughs to make the case for more investment in schemes like these.”

Simon Munk, Campaigns Manager at London Cycling Campaign, said: “LCC is delighted the link between Cycleways 2 and 3 in central London is open. This has long been a priority stretch to make cycling safer, enabling a lot more journeys by cycle. We’re looking forward to TfL and boroughs making a lot more vital links safe for cycling, and installing many more main road cycle tracks to help London move rapidly towards a zero fatality, zero carbon roads system, where all Londoners feel safe and comfortable cycling.”