While bike and scooter usage has increased by 20 per cent in the Metropolis of Barcelona since 2019, AMB’s study has found that growth has been more moderate in Barcelona city. 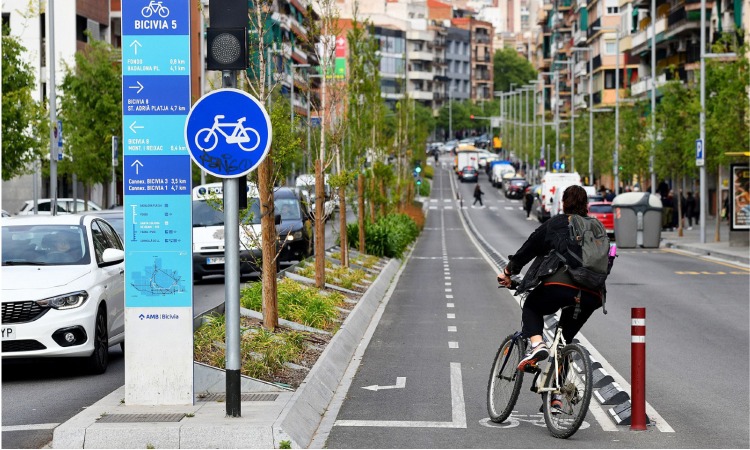 Area Metropolitana de Barcelona (AMB) has announced that it has commissioned a study, in partnership with the Instituto de Estudios Regionales y Metropolitanos de Barcelona (IERMB), which shows the remarkable growth in the use of bikes and scooters in the metropolitan area of ​​Barcelona.

The study, ‘Capacities in the Bicivia metropolitan network (2021). Evolution 2019-2021 and comparison with other mobility data’, has found that there has been a 49 per cent increase in the use of the Bicivia during a working day, between 2019 and 2021.

Designed by AMB in agreement with the metropolitan councils, the Bicivia is the cyclable network of the metropolis of Barcelona. With nine main axes and more than 500km, once it is fully completed, the network will allow people to cross the territory from north to south and from west to east.

“This data shows that the metropolis of Barcelona had and still has great potential for growth in the use of bicycles as a means of regular travel. They also reaffirm the policies led by AMB to create this metropolitan network and promote its use. They confirm that our bet is right and that we need to complete the Bicivia network. We have shown that, once they have the infrastructure, the citizens are committed to changing their habits and making use of them,” said AMB‘s Vice President of Mobility, Transport and Sustainability, Antoni Poveda.

Specifically, the study has found that the use of bikes has increased by 34 per cent, while scooter use has increased by 123 per cent. These two vehicles already represent a third of the total flow of active travel in the Bicivia network, whereas two years ago, they only represented 22 per cent.

Overall, the use of this metropolitan cyclable network has increased by more than 20 per cent between 2019 and 2021. The highest growth was recorded at the points of the Bicivia network closest to the coastal area. Specifically, on the Bicivia axis 1, which connects El Prat de Llobregat, Gavà and Castelldefels.

In contrast to this evolution in the metropolis as a whole, in Barcelona city, the growth has been more moderate, standing at a 17 per cent increase. This data has been obtained as a result of the permanent counts carried out by Barcelona City Council on the city’s cycle lanes. The evolution from 2019 to 2021 shows how demand is declining slightly in the city centre, while growing in less central neighbourhoods.