In 2021, Transport for London’s bicycle hire scheme recorded a record-breaking over 10.9 million hires across the year, with participation widening among people from ethnic minority communities. 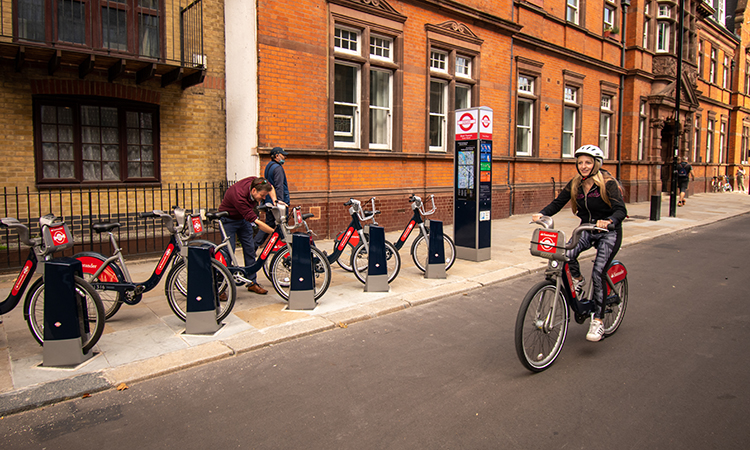 Transport for London (TfL) has announced that its pioneering Santander Cycles bicycle hire scheme experienced a historic year in 2021, with over 10.9 million hires across the year – well surpassing the previous best target of 371,000 hires set in 2018.

More than one million individual customers used the cycle hire scheme in 2021, which is the first time that this milestone has been reached in a calendar year. Additionally, 178,000 new members joined the scheme in 2021, representing a seven per cent increase on 2020 and more than double that of any year prior to 2020.

Throughout the pandemic, cycling levels were boosted overall, from 21 per cent of Londoners in 2019/20 to 27 per cent in 2020/21. Participation also widened, particularly among people from ethnic minority communities. Research has found that half of Black and Asian non-cyclists (49 per cent and 46 per cent, respectively) are now open to start cycling.

Furthermore, TfL research in 2021 found that one in five people who don’t cycle are now actively considering cycling, which could increase participation levels to more than 40 per cent of Londoners. This marks a significant achievement, as a thriving cycle hire scheme is essential to the Mayor of London, Sadiq Khan’s, plans to make walking and cycling easier.

“It’s fantastic to see our cycle hire scheme reach such incredible heights, achieving its highest ever hire numbers [in 2021]. Not only have we seen a huge rise in cycling since the pandemic, but participation has also broadened, particularly among people from minority ethnic communities. In order to keep up this success, we need safe roads for cyclists, and we continue to work with boroughs to roll out cycle lanes, extra pavement space and safer junctions. I urge anyone who has been thinking of taking up cycling to give it a go and get riding [in 2022],” said the Mayor of London, Sadiq Khan.

TfL continues to work closely with local boroughs to create space for cycling across the city, which includes building a strategic network for cycling in London, transforming town centres and reducing traffic on residential streets. As this work is reliant on continued funding, a long-term sustainable funding deal from the UK government for TfL is vital.

In order to help to break down the barriers that stop some people from cycling – including fitness, age and journey length – TfL and Santander are working to introduce approximately 500 electric bikes into the scheme from summer 2022.