With the return of commuters to London offices, Transport for London’s Santander Cycles hire scheme has reached its highest September hires in its 11 year history. 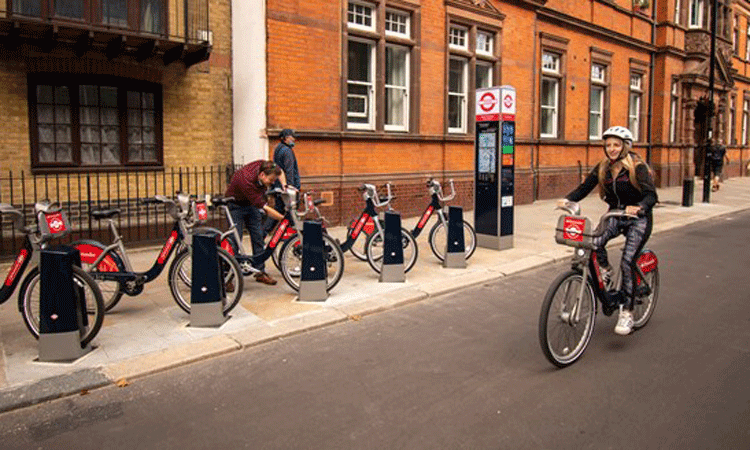 Transport for London (TfL’s) flagship cycle hire scheme is continuing to go from strength for strength with its highest September hires in its 11 year history, as increasing numbers of Londoners returned to the office.

Office workers returning after the summer holidays helped contribute to the record figures recorded in September. Last month, TfL saw the highest volume of Santander Cycles commuter hires since March 2020, with an average 7,573 daily hires made between 7.00 am and 10.00 am on weekdays.

Will Norman, London’s Walking and Cycling Commissioner, said: “Santander Cycles were a lockdown lifeline for many Londoners, so I’m delighted that the scheme is now playing a key part in London’s recovery from the COVID-19 pandemic. Our record September hires echoes the wider trend of more Londoners choosing to cycle. We are determined to do all we can to build on this further – including by introducing electric  Santander Cycles to the network and expanding the scheme to new areas – to ensure a green and sustainable recovery for our city.”

“We’re pleased to see  Santander Cycles play a vital role in enabling people to return to work and it’s fantastic to reach yet another big milestone with 10 million hires made through the app,” added David Eddington, TfL’s Head of Cycle Hire. ” The cycle hire scheme continues to help millions of Londoners commute to work, explore the capital, and exercise. We hope that our London Riders weekly prize draw will encourage more people to cycle and we’re looking forward to expanding our iconic cycle hire scheme with more app improvements and the introduction of electric bikes.”

Since May 2020, more than 100km of new or upgraded cycle lanes have been built or are under construction, along with tens of thousands of square metres of extra pavement space reallocated for people walking. The measures mean people are increasingly using bikes to get around their local area and for exercise, with TfL data showing cycling during the COVID-19 pandemic increased by 22 per cent in outer London compared to spring 2019, with a seven per cent rise in inner London.