Constructed over a five-year period, RTA’s new dedicated lanes will cover eight main streets in the city and will bring Dubai’s total length of dedicated bus and taxi lanes to over 48km. 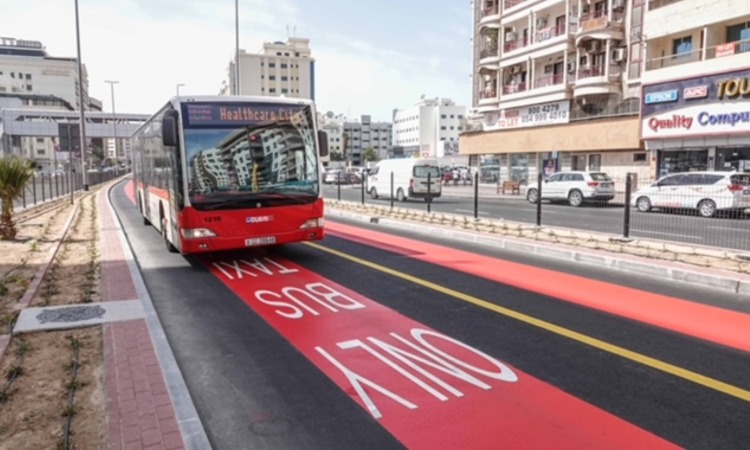 Dubai’s Roads and Transport Authority (RTA) has announced that it has endorsed a plan to construct dedicated bus and taxi lanes extending 37km, over a five-year period from 2023-2027.

The dedicated bus and taxi lanes will encourage people to ride public transport rather than use private motorised vehicles and will increase the average bus speed and reduce the travel time during peak hours by more than 40 per cent. As seen in several metropolitan cities in America and Europe, in addition to reducing journey times, dedicated bus and taxi lanes increase the compliance with on-time bus departures, encourage the public to use mass transport means, improve taxi arrival times and reduce the direct and indirect operational costs, as well as pollution.

Furthermore, the project is expected to contribute to a 30 per cent increase in public transport riders by 2030 on some streets and reduce the requirements of additional buses due to the journey time saved.

“The implementation of dedicated bus and taxi lanes plan is a huge success based on the past three phases of the project. It saved about five minutes of journey time of each bus, which improved the bus journey times by about 24 per cent. It also improved the satisfaction of bus and taxi riders,” said Al Tayer.

Earlier, RTA had completed the construction of dedicated bus lanes stretching 11.6km, which included a separate lane for buses and taxis on Khalid Bin Al Waleed Street extending 4.3km. These projects contribute to realising the authority’s strategic goal to improve the living standards in the city, and enhancing the happiness of public transport riders.