In line with TfW’s commitment to deliver a more equitable transport network, the expansion of Pembrokeshire’s fflecsi scheme will provide rural passengers with an important connection to key urban areas. 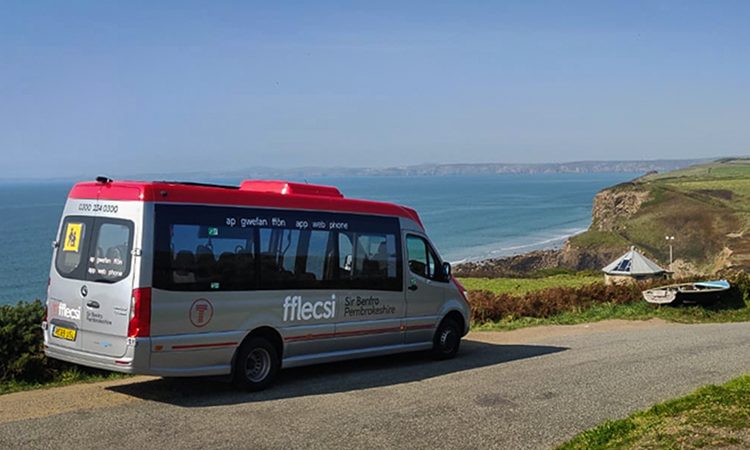 Transport for Wales (TfW) has announced that it is expanding its fflecsi service in Pembrokeshire, allowing more communities across the county to benefit from demand responsive transport (DRT).

Working in partnership with Pembrokeshire County Council, the new fflecsi zone replaces the current 315 bus service and will connect villages and hamlets in the Dale Peninsula to Milford Haven and Haverfordwest – integrating with wider public transport routes.

The expansion will begin on 30 January 2023 and will link up with the successful fflecsi service in North West Pembrokeshire, which has seen an increase in passenger demand since it began operating in September 2020.

Together, the two zones will cover a large portion of the Pembrokeshire Coast National Park, offering visitors to the area an accessible, environmentally friendly transport alternative to some of the county’s most popular destinations, including the Wales Coastal Path.

TfW also supports the operation of the fflecsi Bwcabus service, which connects rural villages in central Pembrokeshire to Haverfordwest, Fishguard and its ferry port, as well as operating zones which serve parts of Ceredigion and Carmarthenshire.

fflecsi Pembrokeshire is a DRT bus service which does not have a fixed-route and timetable but an operating zone which enables passengers to be picked up and dropped off anywhere within that fflecsi zone.

Rather than passengers waiting at a bus stop for a bus to turn up, they can book a journey in advance using the fflecsi app, or by calling customer service. Passengers are informed where to catch the bus and at what time it will be arriving – the pick-up point will be near as possible to the location of the passenger.

Andrew Sherrington, Head of Bus Network and Service Development, said: “fflecsi has grown to become a dependable public transport choice in rural Pembrokeshire and its expansion will now allow more people across the county to access the service for everyday journeys and to make important travel connections. Passenger numbers continue to grow and in August and September of this year (2022), figures were more than double what they were for those months in 2021.”

Rhys Sinnett, Cabinet Member for Residents’ Services for Pembrokeshire County Council, said: “This is a really positive intervention by the county council in order to protect a service for rural passengers in this part of the county and ensure that they continue to have access to key urban areas. The fflecsi Pembrokeshire scheme has proved extremely popular in the North of the county, both for tourists and local people, and we hope to see this success maintained when the new zone is introduced.”