Following extensive testing in a controlled environment, the Navetty research project’s autonomous vehicles progress to the next stage, as they are now fully driverless, without a supervisor on-board. 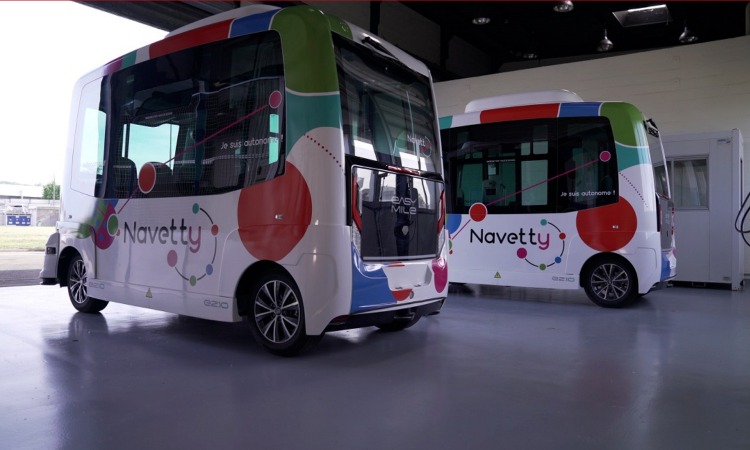 Transdev has announced that the Navetty research project’s autonomous and electric shuttles are now operating fully driverless in a complex, normal traffic environment in Yvelines, France, marking a European first.

For the Yvelines Department, which has invested €2.5 million in the project, the Navetty research programme aims to ensure the deployment of these autonomous vehicle technologies on roads open to public traffic. The project is also supported by EasyMile, Transdev, ArianeGroup and VEDECOM.

Maxime Rabasté, Director of Environment and Development at the Yvelines department, said: “Solving the last mile problem, which many of the region’s residents encounter in their daily travels, is also a priority objective, and is fully in line with the strengthening of the region’s mobility investment policy. This autonomous shuttle service should eventually provide an optimal connection to the future RER EOLE stations. The department is also continuing to support the strengthening of links between the aeronautical, technological and automotive industries, which are very present in the region.”

Two shuttles, operated by Transdev, run daily on routes of up to 6.6 km, enabling up to 10 ArianeGroup employees per trip to travel around the company’s 92-hectare site, while guaranteeing service quality and safety. Since the launch, more than 50 daily trips have been made, covering 23,000km.

According to Transdev, this site is the ideal launch pad to future deployment on an urban scale, as it brings together all the complexities of a city. The shuttles are integrated into a shared environment where pedestrians and vehicles circulate, without modifying existing infrastructures or dedicated lanes. The route integrates traffic circles, intersections, a tunnel and 18 stops spread throughout the site.

The autonomous shuttles have been deployed progressively over a period of five months, guaranteeing a total level of safety at each stage. A remote supervisor can intervene or interact with passengers at any time from the central control station (CCS), with the possibility of acting when necessary.

The arrival of a third shuttle in January 2023 will test the feasibility of supervising a fleet of three autonomous shuttles with a single supervisor, while ensuring safety and service performance. In addition, it will also allow planning for the deployment of a permanent commercial service of autonomous shuttles. This is the only project in Europe in which three shuttles will be supervised remotely by one single supervisor, without an on-board operator and under normal traffic conditions.

Virginie Fernandes, Director of Strategy and Transformation for Transdev Group, said: “Through this programme, Transdev is preparing to operate the first commercial autonomous shuttle services. From the training of supervisors to the deployment and operation of the service, we are applying our business expertise to achieve the same standards of safety and quality of service as in our fleets of driven vehicles.”

With the initial technological goals achieved, a mobile application for on-demand reservations is set to be launched in early 2023. This will allow employees to order a shuttle directly from their location due to an integrated geolocation system.

The Navetty project will continue to progress, with the launch of a route on an open road between the Mureaux train station and the company site set for 2023. This will be an opportunity to test the implementation of a last mile service and to also reflect the next stages of deployment.

▶ Considering the future of mobility