By making these temporary measures permanent, CTA will be able to improve service reliability by allowing buses to travel faster and stay on schedule, making riding the bus a more reliable and attractive transport option. 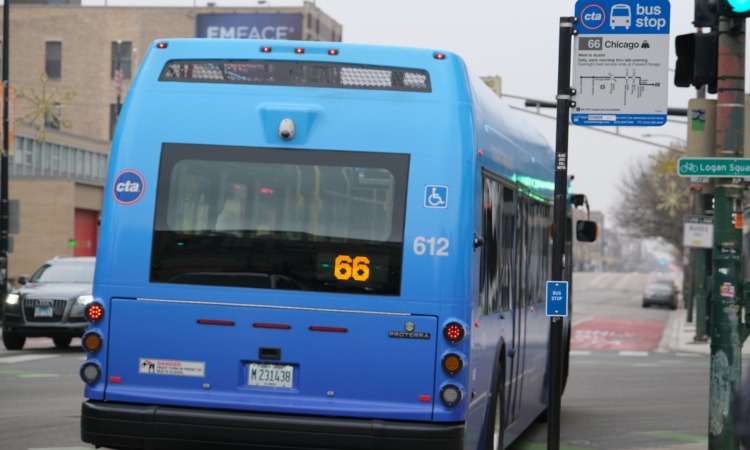 The Chicago Department of Transportation (CDOT) and the Chicago Transit Authority (CTA), along with 1st Ward Alderman Daniel La Spata, have announced the completion of work to further improve and make permanent the Chicago Avenue ‘Pop-up Essential’ bus only lanes introduced by Mayor Lightfoot in 2020.

Initially implemented to help prioritise bus services for essential workers and other transit riders during the pandemic, the conversion of these traffic lanes to 24-hour dedicated bus lanes has proven beneficial and are now permanent.

“The completion of this full-time, dedicated bus lane on Chicago Avenue is part of our city-wide commitment to ensure all of our residents can get around our city safely and efficiently,” said Mayor Lori E. Lightfoot. “Investing in a robust and reliable public transportation system improves the transit experience and quality of life for all residents, and we are proud to be able to continue enhancing this important resource.”

Work performed along the mile-long, bus-only lanes featured along Chicago Avenue, between Western and Ashland avenues, will support faster, more reliable bus service along one of Chicago’s busiest corridors. This project work also complements ongoing collaborative efforts between CDOT and CTA to improve the transit experience through similar investments, including other Bus Priority Zone (BPZ) projects in progress.

The outer travel lanes of eastbound and westbound Chicago Avenue feature a designated bus only lane now marked with red paint and text and will remain in effect 24 hours a day, seven days a week. By providing a designated space for buses, the new lanes will help buses avoid getting stuck in traffic congestion and help keep other vehicles clear of areas where buses need priority, like bus stops. This helps buses travel faster and stay on schedule, and allows for easier boarding.

“The temporary, pop-up essential bus lanes were a useful tool we implemented during the pandemic that have since proven to be vital in ensuring that buses traveling the #66 bus can pass through what has long been a bottle-neck and major source of delays along the route,” said CTA President Dorval R. Carter, Jr. “By making these temporary measures permanent, we are cutting several minutes off the typical commute for those travelling through the corridor, and further improving service reliability across the entire route.”

The improved bus only lanes are part of a variety of transit investments, including bus lanes and bus stop improvements throughout the city and complement ongoing BPZ projects currently under construction or in design. The BPZ programme is a partnership between CTA and CDOT that targets pinch points along major bus routes to speed up ‘bus slow zones’, which are often caused by traffic congestion, insufficient space for bus boarding, or a major intersection that creates a bottle-neck.

“CDOT and CTA are working closely together to improve the entire transit experience – from installing infrastructure that improves bus efficiency to creating more walkable streets that make getting to and from bus stops safer and more comfortable,” said CDOT Commissioner Gia Biagi. “This full-time bus lane on Chicago Avenue, combined with ongoing pedestrian safety investments, will create a more transit and people friendly street.”

Additional improvements are planned for this stretch of Chicago Avenue to calm vehicle traffic and improve pedestrian safety. In the coming weeks, CDOT will  install kerb bump-outs and left-turn traffic calming at various intersections. The new traffic calming infrastructure will encourage drivers to take turns at safer speeds and improve drivers’ visibility of people crossing the street.