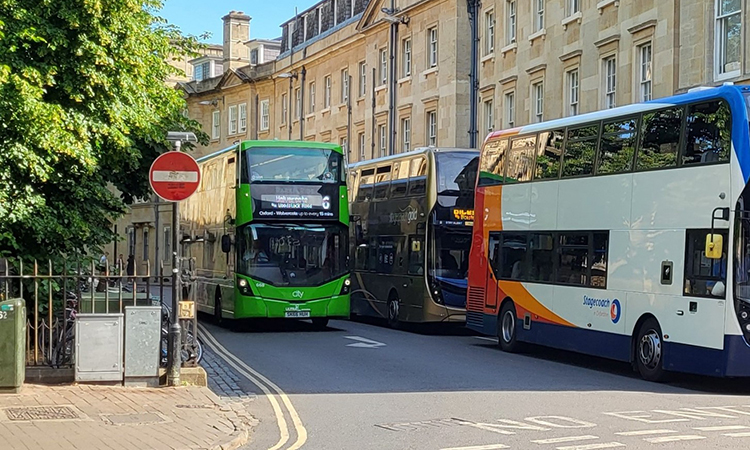 Oxfordshire County Council has announced that it has been awarded £12.7 million of government funding for measures to get people out of their cars and back on to buses.

Earlier in 2022, the council was one of 31 successful applicants out of 79 to receive an ‘indicative allocation’ for its Bus Service Improvement Plan (BSIP). It followed the council’s bid for £56 million from the government’s National Bus Strategy fund.

This £12.7 million has now been confirmed by the Department for Transport (DfT) and will support measures over the next three years, including cheaper fares for under-19s, new rural services, bus priority improvements across the county and proposed traffic filters to reduce journey times and support the introduction of new zero-emission electric buses.

Councillor Andrew Gant, Oxfordshire County Council’s Cabinet Member for Highways Management, said: “In the context of a significantly reduced funding allocation nationwide, with only 40 per cent of BSIPs receiving any money, £12.7 million represents a significant boost for bus users in Oxfordshire. It is welcome confirmation from the government that our approach to prioritise public transport is the right one.

“Effective public transport is key to many of our priorities as a council. Combined with many other measures that we are working on with our partners, this funding will put us on a positive path to making bus travel more attractive and environmentally friendly than ever before.

“Supporting cheaper travel for young people, including the introduction of a £1 flat fare within Oxford, as well as reduced fares for under-19s countywide, is a priority. We want young people to adopt sustainable transport habits which will then stay with them throughout their lives,” Gant concluded.

Passenger numbers in Oxfordshire, which had been in decline between 2014 and 2019, were badly hit by the impact of the pandemic. Bus companies have also suffered from rising fuel prices, shortages of drivers and uncertainty about financial support from the government.

The BSIP is one of a number of measures being brought in by the council and its partners – including bus operators, other local authorities and major employers – to increase passenger numbers. Others include:

The aims of the government’s National Bus Strategy are to see more people using more attractive bus services through revisions to fares, routes, hours of operation and availability of information, and to see improvements to reliability, punctuality and journey speeds.