With the first vehicles to be launched later in 2022, Liverpool City Region’s new zero-emission buses will carry a range of special features to enhance the customer experience, including wireless charging and internet access. 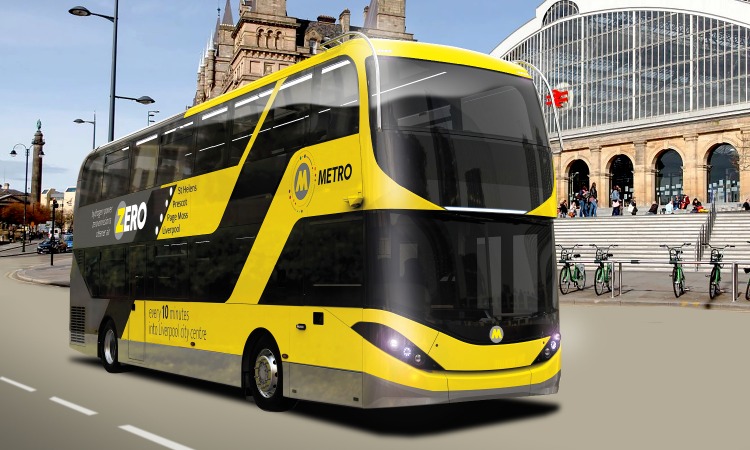 The Liverpool City Region Combined Authority has released the first images of the interior of the new, zero-emission hydrogen bus fleet that is coming to the city region later in 2022. The CGI visuals give a sneak peek at the hi-spec interiors and features which passengers on the new vehicles will be able to experience when they come into service.

Designed especially for the city region, the buses will feature larger and more comfortable seats with unique pattern designs, just as on the new trains for the Merseyrail network.

With increased capacity for wheelchair users and passengers with prams or buggies, the buses will also be some of the most accessible in the country. The vehicles will also carry a range of special features passengers said that they wanted to see onboard – these include wireless and USB phone charging, internet access and reading lights above seats.

Other new features of the hydrogen buses include camera wing mirrors to improve safety, as well as audio and visual announcements for next stops, with high definition onboard screens to update passengers on journey progress in real time.

Screens will also display information about onward connections as the vehicles approach train and bus stations, allowing passengers to easily transfer between different modes of travel – an important part of Mayor Rotheram’s plans for an integrated London-style transport network for the Liverpool City Region.

Steve Rotheram, Mayor of the Liverpool City Region, said: “Our new zero-emission hydrogen buses will not only give passengers a clean, green and comfortable way to get about, but they will also act as the trailblazer in our city region’s journey to develop one of the country’s healthiest public transport networks. Just like our new trains, these buses have been designed and built for the needs of people in our region in mind and will be publicly owned too. Reforming our bus network a key part of my plan for an integrated London-style transport network that makes traveling around our region quick, cheap and reliable – and we’ve recently taken a massive next step towards doing that by agreeing that franchising is our preferred model for running bus services.”

The 20-strong, state-of-the-art hydrogen bus fleet will be directly purchased through the Liverpool City Region’s Transforming Cities Fund, and, like the new trains for the Merseyrail network, will be owned by the people of the city region.

With the Metro Mayor having set a target for the Liverpool City Region to become net zero carbon by 2040, the hydrogen buses will be an important addition to the region’s existing fleet, which is already more than 70 per cent low emissions.

It is planned that the buses will initially serve the region’s busiest route – the 10A between St Helens and Liverpool city centre, jointly operated by Arriva and Stagecoach.