York by Bus: a campaign to help passenger growth

City of York Council is encouraging even more people to travel by bus in York by offering a package of bus incentives through its ‘York by Bus’ campaign. Cllr Dave Merrett, Cabinet Member for Transport, Planning and Sustainability at City of York Council, explains the different aspects of the campaign – including a new multi-modal journey planner – and its aims to help deliver benefits for the city. 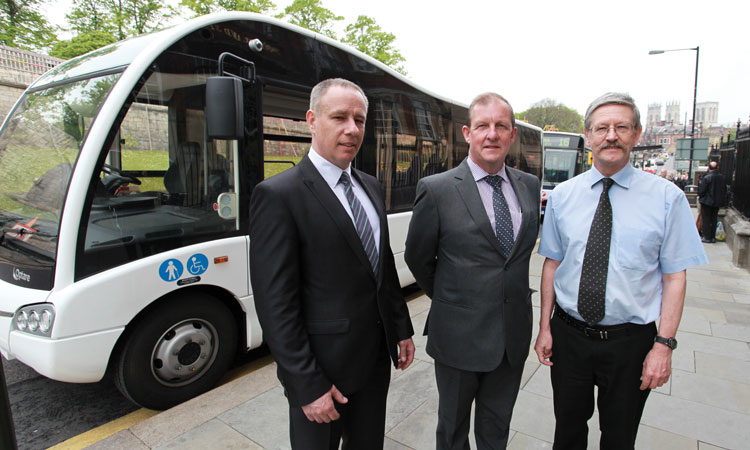 The York by Bus campaign is funded through part of the £3.5 million Better Bus Area Fund, awarded to City of York Council from the Department of Transport (DfT) in 2012. The campaign is supported by all bus operators in York who work together through the York Quality Bus Partnership, and builds on a number of improvements which will help to further support bus services around the city.

Our aim is to encourage even more people to travel by bus and increase passenger numbers by 18% by 2015. We know this campaign will help to deliver real benefits for the city and for every £1 spent in York, this project should deliver £4 of benefits by reducing congestion, improving air quality and health, and reducing road accidents.

New real-time passenger information screens have been installed at bus stops across the city centre and the city’s new transport smartcard is set to be launched later in 2014.

Through this campaign we hope to raise even more awareness of the benefits of travelling by bus in York. We have one of the best Park & Ride services in the country and offer a number of frequent and several now reduced-cost ordinary bus services across the whole of York. Working closely with bus operators, York by Bus is set to be the biggest bus campaign York has ever seen.

In 2013, York was selected as one of only four areas across the country to be awarded a share of the £16.5 million new Better Bus Area funding (aka BBA2), designed to drive-up bus performance and passenger numbers by getting operators and authorities to work together through bus partnerships. As such, York is now designated as a ‘Better Bus Area’, enabling the council and bus operators’ to combine resources to improve the bus service, particularly its reliability, which can be difficult to manage in a historic city with a road network built more around the requirements of horses and carts than modern traffic.

We will invest this money towards measures to assist bus services and the DfT will add another 20%. Altogether, the bid is worth £1.4 million between now and 2018, with £1 million being provided by bus operators, £200,000 from City of York Council and £200,000 from the DfT’s top-up payment.

Working together, City of York Council and operators will prioritise how the money is used on measures that will include: improving traffic signals and small changes to kerblines to help buses across junctions; funding to continue with successful features of the Better Bus Area funding won by the council in 2012, including the city’s Bus Warden, officers in the Traffic Management and Control Centre who respond to incidents on the bus network and work with operators to keep buses on time and the Bus Enquiry Point at the Railway Station; and paying for short lengths of new bus lanes where they are needed.

By working closely with local bus operators to drive through further improvements on York’s bus network, we will continue to improve service reliability and offer more incentives to travel by bus.

In addition to this, two new and improved Park & Ride sites are due to open in York in summer 2014 at Askham Bar and Poppleton Bar. The new sites will build on York’s portfolio of five existing sites across the city which attracts over four million passenger journeys every year.

The £22.7 million project represents one of the largest single investments in the city’s transport infrastructure since the northern ring road was built in the 1980s. The DfT will fund 70% of the scheme and City of York Council the remaining 30%.

York is also set to become the first city in the north to introduce a new fleet of electric buses to its Park & Ride service and other routes across the city thanks to a successful bid in May 2013 which awarded the authority, First and Transdev £1.4 million funding towards 15 new electric buses.

Made available through the government’s Green Bus Fund, the new buses will provide cleaner and greener bus journeys for thousands of passengers across the city and will save over 7,500 tonnes of CO2 emissions in York over their lifespan.

A recent study has shown around 80% of York’s bus services could be operated using electric vehicles because they operate largely within the urban area, making it easy to provide recharging facilities. It is therefore our aspiration to improve air quality in York by converting these services to electric power, and we’ve been determined to improve air quality and the city’s carbon footprint by working with bus operators through York’s Quality Bus Partnership to achieve this. These 15 new electric buses will be a tremendous step forward, and will demonstrate how we can transform York’s bus fleet and environment for the future.

A boost to the local economy

The electric buses will be assembled close to York at Sherburn by manufacturer Optare, providing a further boost to the local economy.

This also supports our ‘Low Emission Strategy’ adopted in 2012 to improve air quality in York. The first such strategy in the country, it contains a variety of measures tackling emissions from different sources, of which buses are an important group given their frequency through the city.

Supporting the growth of electric vehicles is a big cultural step-change nationally, but York is again leading the way in this area and in November 2013 became the region’s first city to introduce a network of pay-as-you-go electric vehicle charging points. By providing these public electric charging points and local electric buses, people will be encouraged to use electric vehicles which are another important step towards achieving an improved carbon footprint.

In addition to the 12 charging points already located across York, the network consisted of six fast charging points and were installed at five locations across city centre car parks (Union Terrace and Nunnery Lane) and Park & Ride sites (Monks Cross, Grimston Bar and Designer Outlet) allowing drivers to re-charge their cars on a pay-as-you-go basis. The network was installed by City of York Council and is publicly accessible with a simple payment system so that users can pay by phone or text in a similar way that drivers currently pay for parking in council owned car parks. Four further charging points will be installed in early-2014 in three additional locations – all with Rapid Chargers to follow.

Besides these many new investments in the city’s transport network, we recently launched the region’s first multi-modal journey planner to help residents, visitors and businesses navigate their way around York easily at a touch of a button. The new planner is supported by our four-year ‘i-Travel York’ initiative, made possible by £4.6 million of government funding which we successfully bid for in 2011.

Compatible with all desktop computers, smartphones and tablet software, the planner1 provides users with the best options for walking, cycling, public transport, including Park and Ride, and driving routes, by simply typing in a destination point.

Building on the Traveline Yorkshire service, the planner incorporates walking, cycling and driving options all in one place – a first for the Yorkshire region.

Providing the latest navigation advice, the planner also helps plan trips to/from anywhere in the UK to destinations within 15 miles of York.

The planner aims to encourage the use of sustainable and active travel modes, such as walking, cycling or public transport and help cut congestion by offering comparative information on trips such as time, distance, cost and CO2 emissions.

Cllr Dave Merrett was brought up in the UK, Canada and Sweden, and has had a lifelong interest in transport, inspired by Goteborg’s integrated tram and bus network which he used extensively as a young person. A British Rail sponsored degree in Engineering Science at Oxford University led to a career designing and assessing rail bridges, currently for Amey Consulting. A Labour Councillor since 1982, Dave has led on York’s Transport, Planning and Environment for much of the last 27 years. 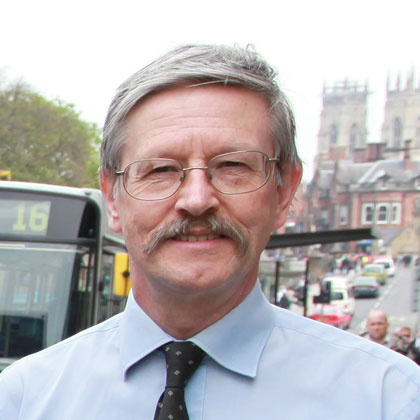