With almost twice as many people now living near a high-quality cycle route in London, TfL’s latest data shows that levels of cycling in autumn 2022 was 40 per cent higher than in 2019. 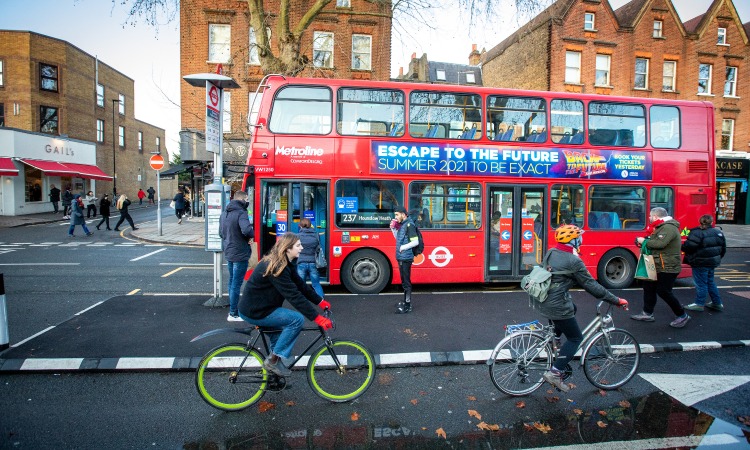 Transport for London (TfL) has announced that it has published data from its annual Travel in London report, showing that there has been a continued increase in  walking and cycling in London, with levels of cycling remaining 40 per cent higher than levels seen before the pandemic.

Following TfL’s work since the start of the pandemic to expand London’s network of Cycleways, the proportion of people living within 400m of a high-quality cycle route is now almost double what it had been in 2019, with 22 per cent of Londoners now living near one, compared to 12 per cent in 2019.

Prior to the pandemic, around 35 per cent of journeys in London had been made on foot. The latest quarter of available data, for April-September 2022, shows that the proportion of journeys made on foot is now 41 per cent. The data also shows that the number of walking journeys that have been made per person per day between April and September 2022 was 11 per cent higher than the 2019/20 pre-pandemic average.

Santander Cycles, which saw record levels of hires during the pandemic, continues to see record hire numbers, with hires at 11 per cent higher than the pre-pandemic level, as of late September 2022. The scheme has broken a number of records throughout the year, with 10.9 million hires so far in 2022.

The report also outlines how passenger numbers on London’s public transport network continue to recover after the pandemic. As of October 2022, demand for Tube services across the week has been around 82 per cent of pre-pandemic levels, with weekend ridership levels on Tube and bus services increasingly edging towards those seen pre-pandemic.

London’s Walking and Cycling Commissioner, Will Norman, said: “It’s great to see that the boom in walking and cycling we saw during the pandemic has continued as more Londoners enjoy using sustainable ways to get around the capital. We must continue to make active travel around the city as accessible and safe as possible. That’s why I’m delighted that this year we’ve seen the introduction of e-bikes to the Santander Cycles scheme, we’ve built hundreds of kilometres of new or upgraded cycle routes since the pandemic and completed work to make some of the capital’s most dangerous and intimidating junctions safer. The Mayor’s bold decision to expand the Ultra Low Emission zone London wide will also see new support put in place to help people switch to greener options such as public transport, bikes, e-bikes or car clubs.”