The trial merger of West Midlands Bus On Demand and Ring & Ride will run throughout 2023 and will provide customers of both services with access to more vehicles, longer hours of operation and wider coverage. 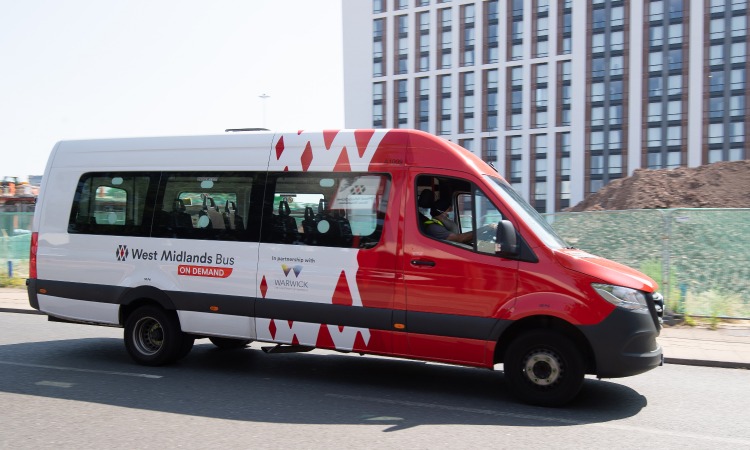 The West Midlands Combined Authority has announced that two door-to-door bus services currently on offer in Coventry are going to be merged, creating the UK’s largest demand-responsive transport (DRT) service.

The trial merger of West Midlands Bus On Demand and Ring & Ride, although taken in a bid to reduce costs following a slow post-COVID recovery, will give users access to more vehicles, longer hours of operation, wider coverage and lower fares.

The Ring & Ride service is available door-to-door to anybody who cannot, or finds it difficult, to use regular public transport due to mobility issues or social isolation. It is currently only carrying around a quarter of its pre-COVID passenger numbers.

This service is now set to be merged into the West Midlands Bus On Demand uber-style shared bus service, which had been launched in the city in 2021 under the region’s Future Transport Zone trial programme.

The services, which are both run by private operators under contract from Transport for West Midlands (TfWM), are dealing with rising fuel costs, driver shortages and reduced passenger numbers and could face an uncertain future long-term if they continued to operate individually.

Ring & Ride customers will also benefit from the greater coverage of West Midlands Bus On Demand, meaning that they will now be able to travel to villages surrounding Coventry. They will also have greater flexibility over bookings – arranging journeys any time between six days ahead to on the day. Currently, Ring & Ride bookings are only taken the day before.

The trial merger, to be run during 2023, will see the introduction of a new charging structure based on distance travelled, with half-price concession fares available for those 18 and under, elderly users and customers with disabilities. Under the proposed fare structure, existing Ring & Ride passengers will pay just £1 for a journey under three miles, while concession fares for longer journeys of up to 10 miles will be capped at £2.

Pete Bond, TfWM Director of Integrated Transport Services, said: “We know the Ring & Ride service in particular offers a valued social lifeline for its customers, who are mostly older or disabled people. Passengers of both services will, through the trial, share rides under the West Midlands On Demand banner and now have the opportunity to travel further and at different times of the day. Other than that, the service will be broadly similar to the one currently enjoyed.”

TfWM, which is part of the West Midlands Combined Authority (WMCA), has secured UK government funding through the City Region Sustainable Transport Settlement, to roll-out on-demand bus services to more parts of the region over the next five years. If the Coventry trial is successful, this will include Ring & Ride.