As part of its commitment to reduce congestion and address the climate change emergency, Transport for West Midlands has expanded its DRT service, West Midlands On Demand, in Coventry. 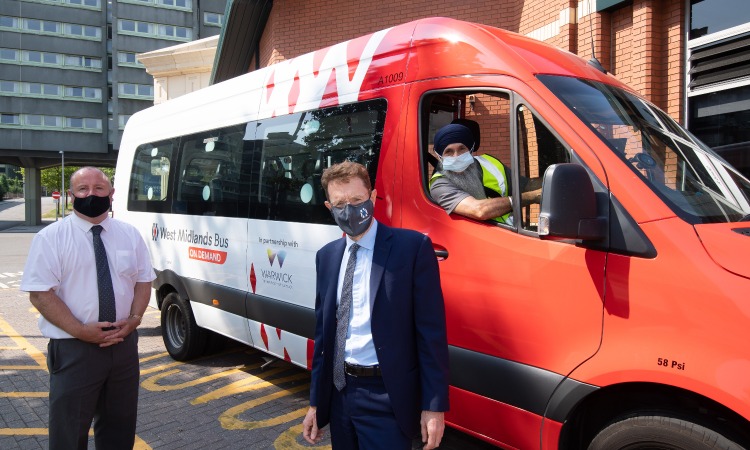 The West Midlands Combined Authority (WMCA) has announced that the pilot of the West Midlands On Demand bus-to-order service in Coventry is being expanded to cover the city centre and key amenities after proving a success with passengers. The buses can be booked via the smartphone app or telephone to pick up passengers for any chosen journey within the zone.

Initially launched around the University of Warwick Campus and south-west Coventry in spring 2021, the service currently covers Kenilworth, Balsall Common and Meriden, with more than 7,500 rides having been taken. Now, the buses are able to pick up and drop off in a wider area, covering the city centre, Walsgrave, the University Hospital and Binley.

The pilot service was launched by Transport for West Midlands (TfWM) as part of the Future Mobility Zone/Showcase scheme to test innovative transport services and technology aimed at reducing private car use and traffic congestion on streets. Demand-Responsive Transport (DRT), which frees buses from fixed routes and timetables, offers people a convenient and affordable ride where and when they need it.

“Using the latest app technology to free buses from fixed routes and stops is just the kind of innovation that we are famed for in the West Midlands. It is part of our plans to offer convenient and affordable alternatives to the car as we look to reduce congestion and address the climate change emergency,” said Mayor of the West Midlands, Andy Street. “The service has proved particularly popular for those whose journeys do not follow main routes. This success is why, with our partners, we are expanding the zone covered to include the hospital and city centre, as well as increasing the number of WM On Demand buses available to passengers.”

Councillor Rupinder Singh, Ward Councillor for Lower Stoke, said: “Encouraging our residents to use public transport is a key aim within this city’s transport strategy. We know that we need to convince more of our residents to leave the cars at home and choose more sustainable methods of travel instead.”

The West Midlands On Demand bus service is run by bus operator Coachscanner, supported by Via, and backed with funding from TfWM – which is part of WMCA – Coventry City Council and the University of Warwick.