In line with the Ministry of Transport’s effort to provide an integrated and sustainable public transit network in Qatar, the new electric bus depot includes some 11,000 PV solar panels to generate power daily to feed its buildings. 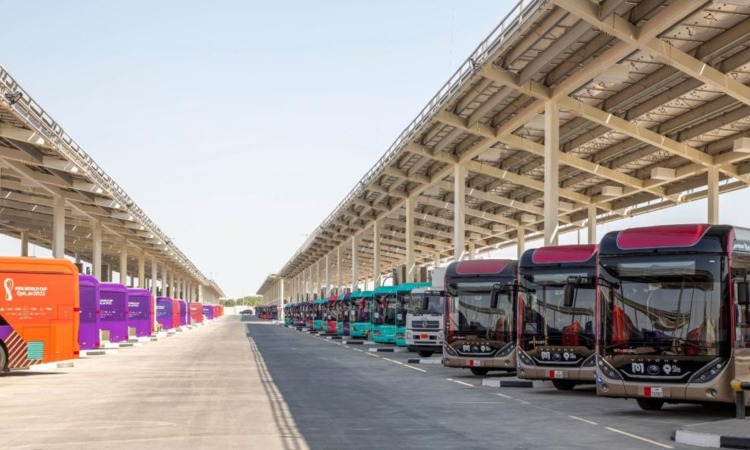 Qatar Ministry of Transport (MOT) has announced that Minister of Transport H.E. Jassim Saif Ahmed Al-Sulaiti has inaugurated the Lusail Bus Depot, which has a capacity of 478 buses.

“Lusail Bus Depot, which is considered the world’s largest electric bus depot, is inaugurated in the context of Ministry’s effort of providing an integrated and sustainable public transit network that covers all areas of the country,” said Minister Al-Sulaiti.

Part of MOT’s Public Bus Infrastructure Program, this depot is the Middle East’s first solar-powered bus depot, as it includes some 11,000 PV solar panels to generate 4MW of power daily to feed its buildings, in line with Qatar’s National Environment and Climate Change Strategy (QNE) goals. In addition, the depot has a special zone for bus rapid transit (BRT) electric buses, which is one of the newest mobility modes in Qatar.

The ministry’s Public Bus Infrastructure Program’s fundamental goal is to improve public transit services in Qatar in step with highest universal specifications, technologies and requirements, as well as to achieve integration with other modes of public transit, such as Doha Metro and Lusail Tram, to service the visitors during FIFA World Cup Qatar 2022 and beyond.

Furthermore, the new depot is located in Lusail City, north of Doha, near Wadi Al Banat Road and has been developed in an area of more than 400,000m². Consisting of 24 multipurpose buildings, the depot also has bus bays, service facilities, recreational facilities, green spaces and substations.

The depot is divided into three zones – the first zone includes 478 parking bays for electric buses, equipped with 248 electric charging equipment, in addition to dedicated buildings for repairing, inspection, washing and vacuuming.

The second zone includes accommodations for all the depot staff with a capacity of 1400 people, constructed in accordance with world specifications and the requirements of the Ministry of Labor. This zone also includes service facilities, such as for dining with convenient services, indoor recreational facility, a mosque, administration building, services building, guardhouses and other service facilities.

Finally, the third zone is a depot for BRT electric buses, equipped with 24 bays and 24 electric chargers to support the operations of that type of buses. It also includes buildings for repairing, cleaning, vacuuming and quick inspection.

An Operation Control Center (OCC) building is also located at the depot in an area of more than 39,000m². It is considered as the central command centre where all bus operations are monitored and controlled. OCC begins operation 2023.