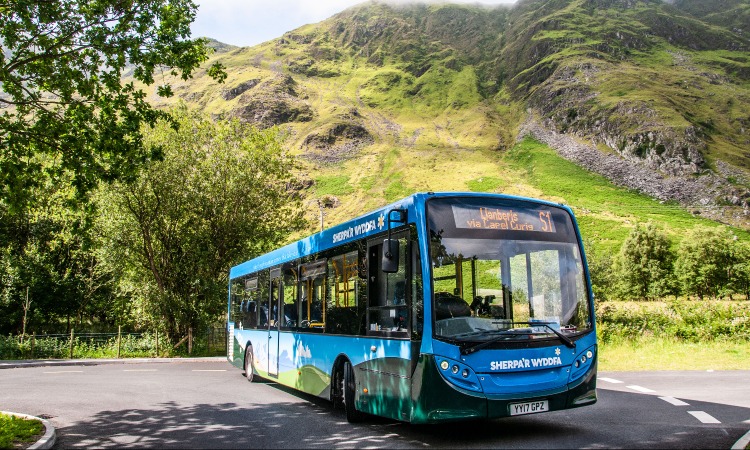 Transport for Wales (TfW) has announced that an improved bus service offering more services and better integration for passengers has officially been launched at Nant Peris in Snowdonia National Park.

TfW has been working in close partnership with Gwynedd County Council to improve the former Snowdon Sherpa bus service. The newly branded ‘Sherpa’r Wyddfa’ has been operating in the area for the past few weeks, bringing tourists and locals into the National Park and helping to ease road congestion.

With a new summer timetable in place providing more frequent services, Sherpa’r Wyddfa provides better options for customers and encourages them to use public transport while travelling throughout Snowdonia National Park.

“The TfW bus team has been supporting Gwynedd County Council with changes to the former Snowdon Sherpa bus service over the past few months, including developing a new brand for the service,” said Lee Robinson, Transport for Wales Development Director for Mid, North and Rural Wales. “We’ve also worked with Gwynedd County Council and Gwynfor Coaches to improve the frequency, routes and integration on the service and have created new promotional leaflets, bus stop flags, information boards and social media assets, with plans to develop a new website too.”

Councillor Dafydd Meurig, Gwynedd’s Cabinet Member for Environment, said: “The developments to the service are excellent and are already helping to drive behaviour change as more and more people are opting to leave their cars at the National Park’s park and ride facilities, and hop on the bus to take them out for a day of adventure.”

Angela Jones, Snowdonia National Park Authority Partnerships Manager, said: “We have been working on a number of projects with TfW to address the issues with parking across the national park and this service is another element which is helping make sustainable tourism a reality here in North Wales.”

Since the introduction of the new timetable in April 2022, passenger numbers have already increased by 18 per cent compared to the same period pre-pandemic in 2019.