By expanding the current law that charges individuals who attack or harass transit workers with second-degree assault, the new legislation will serve as a deterrent to those seeking to harm transit employees. 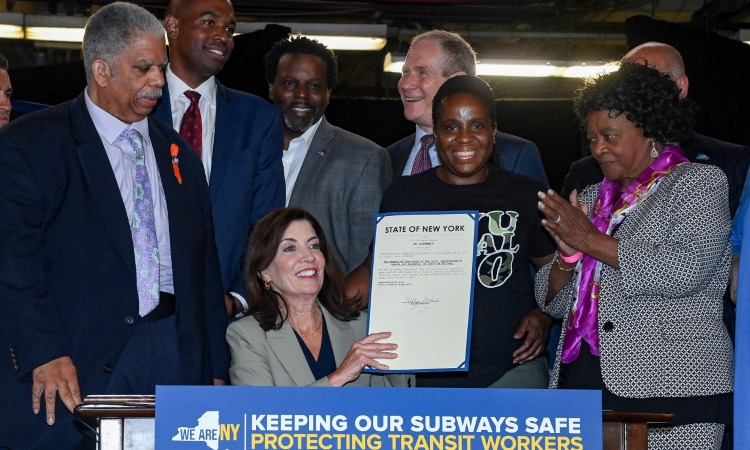 The Metropolitan Transportation Authority (MTA) has announced that Governor Kathy Hochul, alongside local officials including MTA Chair and CEO Janno Lieber, has signed a legislation to protect roughly 11,000 more transit workers against assault and harassment.

The new bill will expand current law that charges individuals who attack or harass transit workers with second-degree assault and will extend criminal charges to individuals who assault station customer assistants, ticket or revenue collectors, maintenance workers, repairers, cleaners and their supervisors, who are not protected by existing law.

“During the pandemic, our transit workers were heroes, showing up while everyone was staying home – putting not only their health and the health of their families at risk, but also risking their lives as subway crime increased,” Governor Hochul said. “New York’s transit workers have always been there for us and now it is our job to be there for them. No one should be subjected to physical violence or harassment in the workplace, and today we are taking an important step in protecting the men and women who keep our subways and buses running.”

Station customer assistants, ticket or revenue collectors, maintenance workers and supervisors employed by transit agencies or authorities work with and among the public, which is why they are vulnerable to harassment or assault by any individual using transit or transit facilities. Thus, this bill will toughen laws to protect additional transit employees from attacks. By charging individuals who physically injure any workers with second-degree assault, the legislation will serve as a deterrent to those seeking to harm transit employees.

Janno Lieber, MTA Chair and CEO, said: “Today’s (27 June 2022) bill signing is enormously appreciated by all of us at the MTA; transit workers are heroes who deserve a safe workplace. But the work on the issue of public safety is not complete. New laws need to be enforced so our workers can run the best public transportation system in the country and move New Yorkers to where they need to go.”

Amalgamated Transit Union Local 1056 President Mark Henry said: “This legislation is needed to serve as a deterrent to those who think it’s okay to attack a transit worker. This is a tool for prosecutors to use to fully prosecute those that attack transit workers.”