As part of a national strategy to modernise public transport, the new electric paper displays will create a better travel experience for commuters across Bahrain’s capital, by providing them with live accurate bus information. 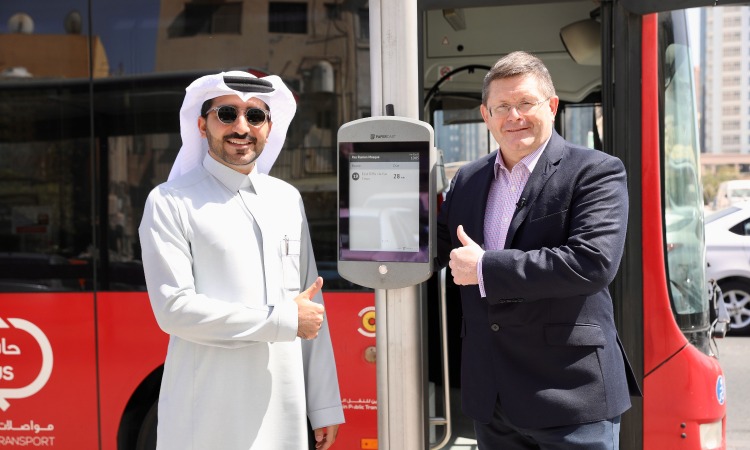 Bus users in Bahrain can now benefit from accurate arrival and departure times and an improved travel experience, following the deployment of the country’s first-ever electronic passenger information service at bus stops across the capital. This project is on behalf of the Government of Bahrain, specifically the Ministry of Transportation and Telecommunication, who is responsible for implementing the infrastructure operated by the Bahrain Public Transportation Company.

This project is part of a national strategy to modernise public transport and transform mobility for all users, which will contribute to the country’s sustainable development strategy – directly aligned with Goal 11 of the United Nation’s 17 Sustainable Development Goals. The system serves as a steppingstone to deliver real-time passenger information across the entire public transport network, with the first-ever metro project in the pipeline.

H.E. Roddy Drummond, British Ambassador to Bahrain, said: “[The new electronic paper displays] will help people to use the bus network flexibly and in the future link into the Metro. Using public transport is important for the energy transition and making our cities more sustainable, and this is a smart contribution to that.”

Papercast has been selected to provide the new system due to its robust electric paper technology that can withstand the harsh weather conditions of Gulf countries, along with its feature rich content management system. Following a successful trial of the company’s display at the new Bahrain International Airport, its partner Spark City went on to win Bahrain’s public transport tender.

Using E-Ink technology, the e-paper bus stop displays have been well proven around the world, and Bahrain joins other prominent deployments across the Middle East region, including Abu Dhabi, Dubai, Kuwait, Makkah and Qatar.