With the addition of the 406 new electric buses, the city of Bogotá will reduce its carbon levels by 17,000 tonnes per year, as well as possess the largest electric bus fleet in Latin America. 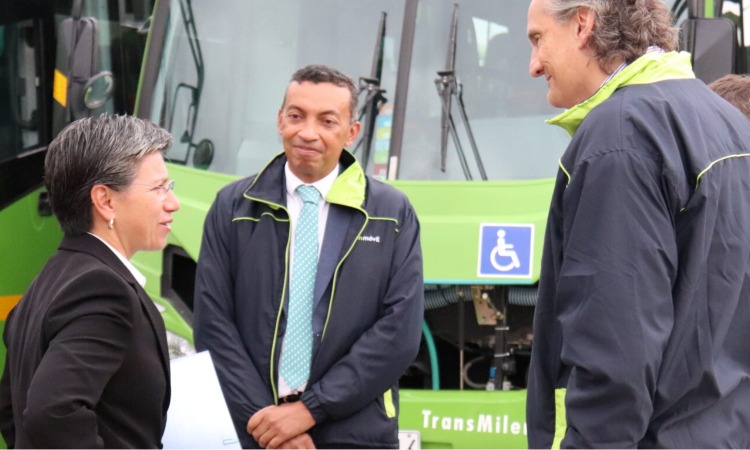 Transdev Group has announced that it has inaugurated 406 new electric buses in Bogotá, Colombia, allowing the city to accelerate its transition towards a 100 per cent zero-emission bus fleet. The buses will be operated by the Fanalca-Transdev joint venture through its company Green Movil, and will be launched gradually throughout April 2022.

Directly related to the project is the installation of a 40,000m2 bus depot from which the new buses will depart – which is the largest electric depot in the world outside of China.

The announcement of the arrival of the new Green Móvil fleet was made by Bogotá Mayor, Claudia López; the Transport Secretary, Felipe Ramírez; and the Director of TransMilenio, Álvaro Rengifo. The 406 buses will run on 14 different routes to serve the neighbourhoods of Fontibón, Usme, Ciudad Bolívar, Usaquén, San Cristóbal, Chapinero, Teusaquillo and Kennedy.

The Green Móvil Logistic Center is located in the neighbourhood of Las Brisas, in the district of Fontibón, next to Bogota International Airport. It has an electrical power of 20 megawatts and has the largest capacity of its kind for bus transportation in Bogota and Colombia and, more generally, in the world outside China.

With the introduction of the 406 electric buses, 6.5 tonnes of fine particles and 17,000 tonnes of CO2 will no longer be emitted in the city per year. Once the entire fleet of 1,485 electric buses is in service, the reduction will increase to 94,300 tonnes of CO2 per year – equivalent to taking 42,000 private cars off the road in Bogotá.

Transdev has highlighted that the new vehicles are equipped with technological elements to improve passenger travel experience, which include on-board cameras, USB ports for charging mobile phones, GPS, information panels, speakers and microphones that communicate directly with the control centre, as well as permanent transmission of operational data. In addition, they include wheelchair accessible platforms, start and hill climbing assistance, rapid energy recharging process and automatic fire control.

Álvaro José Rengifo, Director of TransMilenio, said: “The continued integration of the electric fleet into Bogotá’s transportation system reinforces our goal of improving service to users, our purpose. We will be able to increase frequencies, reduce noise, improve air quality for passengers and the community, in general. We are putting the best technology currently available in the market at the service of citizens. In addition to the benefits for users, the entry into service of this new fleet has generated more than 1,100 direct jobs through the Green Móvil concessionary.”