Tube stations blooming in 150th year of the Tube

“I’d like to thank all our staff for turning our stations, depots and train crew sites into places that are bursting with colour…” 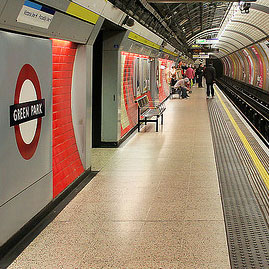 Staff at Tube stations have been racing to grow the most fragrant honeysuckle at Leyton, the loveliest lilies at Rayners Lane and the tastiest spinach at Hampstead.

All this green-fingered work is done in their own time as part of the Tube’s annual Underground in Bloom competition.

Platforms, station entrances and ticket halls have been transformed into colourful oases for customers to enjoy.

Some employees have used the 150th anniversary of London Underground for inspiration by growing a bed of flowers in the shape of the number 150 or by cultivating Victorian era blooms. Other staff have even used what little space they have to nurture a miniature lawn in a depot.

A team of judges has been assessing the entries, which include categories such as hanging baskets, tubs, cultivated gardens and fruit and veg.

This year has seen 68 entries from stations, depots and train crew sites. Judges are looking for overall impact of the display, imagination and creativity.

Extra points will be given for ‘greener’ gardens and for the interpretation of the 150th anniversary theme.

Phil Hufton, Chief Operating Officer for London Underground, said: ‘I’d like to thank all our staff for turning our stations, depots and train crew sites into places that are bursting with colour in the 150th year of the world’s first underground railway.

‘Real effort has gone into creating these horticultural masterpieces by our workforce in their own time and we know it’s much appreciated by our customers.

‘With so many excellent entries it’s going to be tough to choose the outright winners of each category, every entrant should be proud of their achievements.’

The awards ceremony will take place on 11 September at City Hall.