Beryl Bikes are unlocked through the an app and can be picked up and dropped off at marked bays which have been selected in conjunction with local councils to best meet the needs of the community. 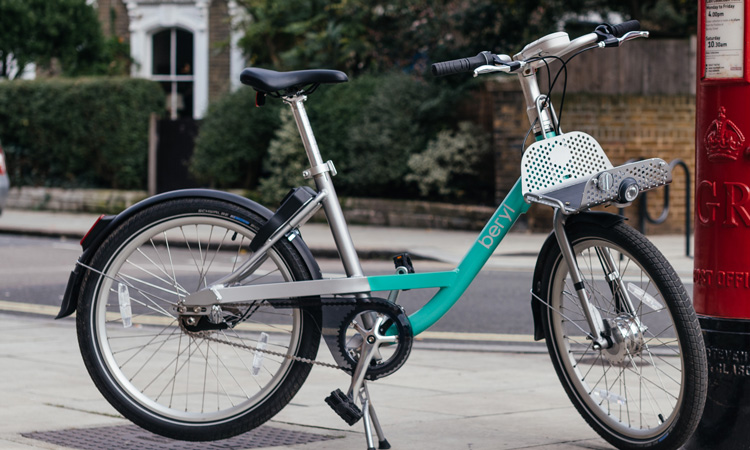 British urban cycling brand, Beryl, has been unveiled as the new dockless bicycle provider for New York’s Staten Island in the next phase of the city’s bike share pilot. Beryl, whose hybrid dockless scheme already runs in London and Bournemouth in the UK will introduce over 1,000 bikes for use on the entirety of Staten Island.

U.S. Department of Transportation (DOT) Commissioner for New York City, Polly Trottenberg, announced that the British brand will begin rolling out its bikes by Spring 2020. DOT also revealed that American micro-mobility providers, JUMP and Lime, who had been operating under the first phase of the dockless pilot since July 2018, will end their services by 3 December 2020.

Beryl’s Laserlight – a white light and laser image technology designed to increase visibility in blind spots and junctions when cycling in the dark, was piloted on the Citi sponsored bikes used in Manhattan, Brooklyn and Queens. Emily Brooke, Founder of Beryl Bikes, has said that she is excited to be returning to New York with their own micro-mobility offering.

“Since we piloted our Laserlight on the Citi bikes in New York in 2017 we have developed a successful, safe, responsible and affordable hybrid bike share system that is driven by the social-impact goal of reducing the barriers to cycling and getting more people on bikes. We are incredibly excited to be working closely with New York’s DOT to launch a scheme that meets the needs of Staten Islanders,” she said.

Commissioner Polly Trottenberg added: “We thank JUMP and Lime, as we learned a lot in the last year-and-a-half from more than 136,000 trips their customers took; lessons we will apply starting next year. We look forward to sharing more details of Beryl’s plans in the months ahead – and this spring, we look forward to welcoming brand-new and distinctive Beryl dockless bikes to all of ‘The Rock.’”