Hanoi authorities are planning solutions to increase the use of public transport and reduce the number of individually-used vehicles in the Vietnamese capital. 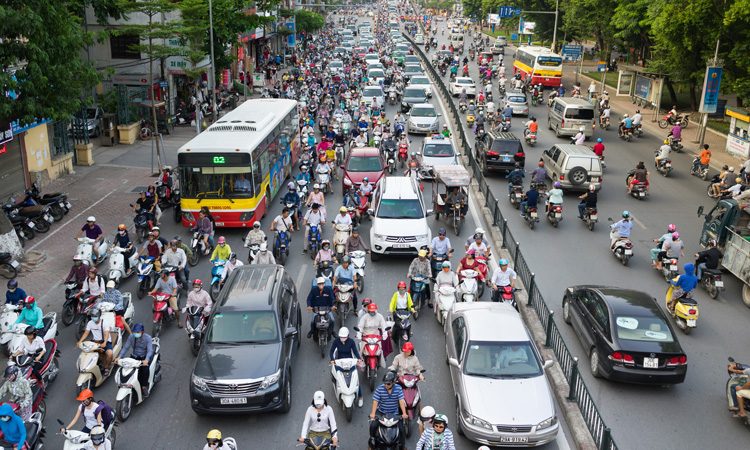 Vehicle owners could soon be charged to drive in certain areas of downtown Hanoi, as authorities look to increase the number of journeys taken by public transport.

Following a decision signed by Nguyen Duc Chung, Chairman of the Hanoi People’s Committee, authorities plan to develop the public transport network and reduce the number of individually-occupied vehicles by 20-25 per cent by 2020 by increasing the use of public transport and bicycles.

The collection of fees also aims to reduce traffic congestion and pollution by deterring single vehicle use. According to the plan, motorbikes – Hanoi’s most popular form of transport – will also be banned from inner-city districts by 2030 in order to further reduce emissions.

The city would continue to expand bus routes to popular areas such as new urban developments, shopping centres and entertainment centres.

The city will introduce more than 45 new bus routes by 2020, some of which could incorporate bus priority lanes to improve services and attract more users.

Figures from the Hanoi Urban Traffic Management and Operation Centre state that 180,000 buses had to skip stops or make diversions due to congestion in 2018, which equates to 3.5 per cent of services that year.

It is said that this largely affected public opinion on buses in the city with the number of passengers dropping in 2016 and 2017, the centre said. However, numbers began to rise again in 2018.

Authorities have proposed that bus and bus rapid transit (BRT) routes be connected with the Cat Linh-Ha Dong Urban Rail Route, meaning fewer people would have to travel into the city using individual vehicles.

The city also plans to build parking infrastructure near bus and rail stations to encourage multimodal journeys, whilst opening mini-bus routes that could access narrower streets.

There have also been discussions on introducing new cycle routes into Vietnam’s urban transport systems.

Cycling beyond the pandemic: integrating infrastructure with existing networks