The improvements to routes for walkers and cyclists, made by TfGM in partnership with Bury, Tameside and Trafford councils, include resurfacing, new ramps and safer crossings for school children. 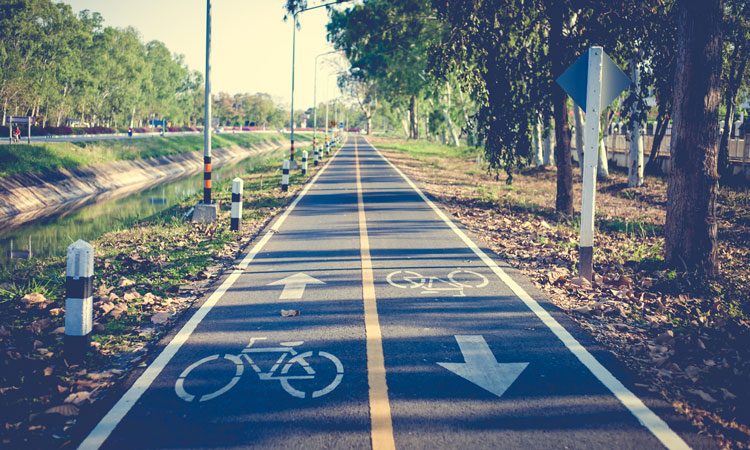 A £2 million series of schemes aimed at encouraging people to cycle and walk across Greater Manchester are now complete.

The schemes, which have been developed by Transport for Greater Manchester in conjunction with Bury, Tameside and Trafford councils include a new ramp at Guide Bridge in Audenshaw, a safer route to West Hill School in Stalybridge, plus surface and access improvements to the Manchester, Bolton and Bury Canal as well as the Bridgewater Way.

These improvements might seem small but the difference they can make to people’s daily lives is huge,” commented Chris Boardman, Greater Manchester’s Cycling and Walking Commissioner.

“The new ramp at Guide Bridge in Audenshaw for example could now mean that someone who would never have considered cycling or walking from the station to the local shops or Ashton town centre can now enjoy a more pleasant, safer journey. I’m sure pupils at West Hill School in Stalybridge feel the same – they can now enjoy a safer route to school, enabling more parents to leave the car at home.”

Bury: Manchester, Bolton and Bury canal
Puddles on the towpath of the disused Manchester Bury and Bolton Canal (MB&B) have been banished by resurfacing with a self-binding gravel. The towpath’s historic cobbles have been lifted and relaid with additional grouting to create a smoother and more attractive path connecting the communities of Radcliffe, Farnworth, Prestolee and Little Lever.

The route and associated paths through Moses Gate Country Park and the greenbelt of the Irwell Valley now offer a quicker, more direct and more attractive route for people travelling on foot or by bike rather than using the main roads.

The project cost a total of £800,000 and was funded by national government’s Cycle City Ambition Grant.

Tameside: New ramp at Guide Bridge in Audenshaw
A new ramp, from Guide Lane down to the towpath that runs alongside the canal, has created a safe access point to the waterside that is suitable for walkers, cyclists, boaters, wheelchair users and people walking with buggies. New signage improves the link between the canal, the railway station, local shops and Ashton town centre.

The canal is in a cutting and all of the existing access points were previously hard to find. This project has provided a gentle ramp right outside the door of the railway station. This connects the Ashton canal towpath route past the National Cycling Centre and on to Manchester city centre.

The project cost a total of £724,000 and was funded by national government’s Cycle City Ambition Grant.

Tameside: Stamford Street / Rassbottom Street and Stamford Park, Stalybridge
TfGM has been working with Tameside Council and West Hill School in Stalybridge to provide a safer route for pupils cycling to and from the school. This has included a cut-through for cyclists from Stamford Street into Norman Road, where a signposted route through quieter streets leads to an improved light-controlled crossing on Darnton Road. This has enabled people on bikes to link to a newly surfaced path on the east side of the Stamford Park lake, towards Ridge Hill.

Further upgrades to paths in the northern section of the park, allowing better access to Mossley Road are planned as part of the Bee Network.

A second route to the south of the school has provided new toucan crossing facilities at the junction of Stamford Street and Rassbottom Street with a new off-road route to and from Stalybridge Station, also benefitting rail commuters who cycle to the station.

The works total in the region of £320,000 and were funded by national government’s Cycle Cities Ambition Grant funding.

Trafford: Bridgewater Way, Altrincham
Further improvements have been made for walkers and cyclists accessing the popular Bridgewater Way in Altrincham. A ramp from Seamon’s Bridge has been resurfaced and a new surfaced path is now complete from Davenport Lane to the canal towpath.

The total cost of the project was £64,000 and was funded by national government’s Cycle Cities Ambition Grant funding.