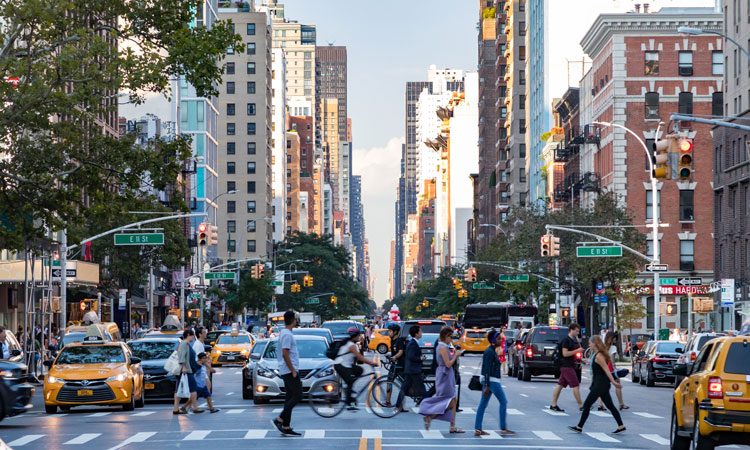 A new report has been published studying the impact of for-hire vehicles (FHV) in New York City.

The report, from the city’s Taxi and Limousine Commission (TLC), comes in response to the increasing congestion seen on New York’s roads and significant growth of FHVs in recent years. In Manhattan, FHV’s now make up nearly 30% of all traffic.

Aiming to manage this growth, and improve efficiency, the TLC was charged with studying the impact of the FHV sector on traffic congestion, vehicle utilisation, driver income, traffic safety, and access to services throughout the city.

The report calculated the impact of introducing six policies, in comparison to a 2020 baseline (considered Policy 1) – where no action was taken. Four individual policies focused on scenarios limiting cruising, regulating FHV licenses, minimum FHV fares, while a further two considered some of these aspects in combination.

The scenario modelling results showed that of the six policies considered, the combination policy of the cap on cruising and regulation of new FHV licenses would yield the strongest vehicle hours travelled (VHT) reduction in the Manhattan core.

This would see the TLC capping the amount of time high-volume FHVs can spend cruising in the Manhattan core during peak hours at 31% of total driving time (down from the current 41% industry-wide). Companies that exceed the cap on cruising would face escalating fines and licensing sanctions.

This requirement would apply to the four high-volume for-hire services operating in New York City, namely Uber, Lyft, Via, and Juno. These companies collectively account for over 90% of all FHV trips and are the only part of the sector that is growing in trip volume.

Simultaneously, TLC would regulate the number of new FHV licenses issued – specifically, keeping to the level as of 14 August 2018 (78,530).

In August 2018, New York City Council passed Local Law 147, pausing the issuance of new FHV licenses for a year and instructing the TLC and Department of Transportation (DOT) to complete the study.

The TLC is now publishing draft rules to implement this strategy.