The number of walking trips has increased by an estimated 0.5 per cent from 2016, and TfL and Go Jauntly are determined to continue the upwards trend. 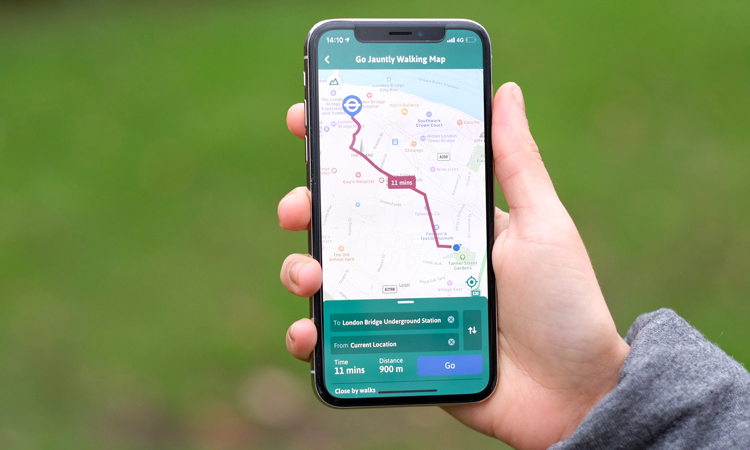 Transport for London (TfL) has teamed up with Go Jauntly to bring the Walking Tube Map to people’s phones, making it easier for people to walk as part of their everyday journey.

The walking map is available by downloading the free app and shows walking times to the nearest Tube and Overground stations, and Santander Cycles docking stations, as well as step-by-step directions for local walks, station accessibility information and details on London pollution levels.

Go Jauntly has included TfL walking routes, The Capital Ring and The Jubilee Walkway on the app, allowing Londoners and visitors to explore the capital easily.

The upgrades also include improvements to the app, making it easier for people to find their closest walk and integrate walking into their daily commute.

Will Norman, London’s Walking and Cycling Commissioner, said: “Walking is a fantastic way to get around London and Go Jauntly’s new map makes it simpler to find routes, especially if you’re in an area which you’re less familiar with.

“The free app has clear directions which will help encourage more Londoners to walk regularly – improving their health and tackling our air pollution crisis.”

The app enables people to enjoy self-guided routes with directions, photos and facts along the way, encouraging active travel which is key to tackling some of the greatest issues facing London, including congestion, poor air quality and poor health caused by inactivity.

Lilli Matson, Director of Transport Strategy at TfL, said: “Walking is an easy and affordable way for Londoners to integrate more physical activity into their daily lives and get around. The new Go Jauntly features will help make it easier for everyone to enjoy London’s great walking routes and improve the walking experience in the capital.”

Earlier in 2018, TfL and the Mayor announced their ambition to make London the world’s most walkable city, with a million extra walking trips taking place each day by 2024. The Walking Action Plan sets out how London will become a city where walking, for those that can, is the most obvious, enjoyable and attractive means of travel for all short trips.

Steve Johnson, Go Jauntly co-Founder, said: “We are delighted to be working with TfL on the latest version of the app. The new walking map is a great way for Londoners to easily walk between TfL stations and discover new routes across the capital at the same time. We’re huge fans of the Walk London Network so it’s fantastic to have the Capital Ring and Jubilee Walkway mapped in the app now and hopefully encourage more people to explore them now.”

TfL and Go Jauntly are committed to making walking inclusive and improving accessibility features is at the heart of that ambition. The Go Jauntly app has been upgraded to include step-free access information for each TfL station, provided by TfL’s open data feed. Wheelchair user friendly routes are included within the app and walks can be filtered by this feature, to ensure more people can benefit from getting active. In addition, Go Jauntly is currently testing audio features of the app and is looking at other ways to develop the app’s accessibility features even further.