The Volocopter is electrically powered and emission free in flight, meaning the new transport system offers to reduce both air and noise pollution… 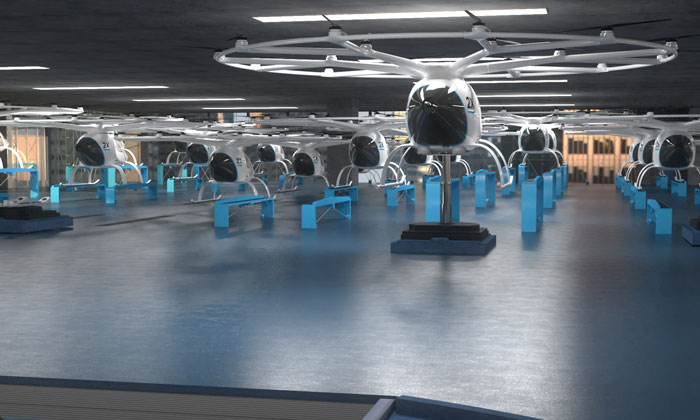 The concept would provide additional mobility for up to 10,000 passengers per day with a single point to point connection.

Alex Zosel, Volocopter co-Founder, expects the first full Volocopter air taxi system, with dozens of Volo-Hubs and Volo-Ports, to be in place within the next 10 years, capable of flying 100,000 passengers an hour.

Volocopters are emission-free and electrically powered aircrafts which take off and land vertically; offering a high degree of safety. Based on drone technology, they have been scaled to carry two people, initially for distances of 27km.

“Our ambitions do not end with developing the aircraft,” said Florian Reuter, CEO at Volocopter. “We are here to develop the entire ecosystem making air taxi services a reality across the world. This includes the physical and digital infrastructure to manage unmanned systems.”

The presented concept defines the infrastructure necessary to operate and scale an air taxi service into a full network system spanning over mega cities, consisting of Volo-Hubs and Volo-Ports. The Volo-Hubs resemble cable cart stations from which Volocopters land and take off from. Once landed the Volocopter is moved inside the Volo-Hub.

Battery packs will be swapped automatically in a protected area by robots, before moving on to the section, where passengers embark for take-off. Volo-Hubs are the key to substantially increasing the system’s capacity: they offer sufficient space to park all Volocopters in operation and provide the infrastructure for charging and maintenance.

Volo-Ports expand the Volo-Hub system and offer direct access to a company, shopping mall, hotel or train station, for example. They do not require any charging or parking infrastructure and subsequently will be less complex to build.

“We expect any air taxi transport system to begin with a point to point connection and over time grow into a system of dozens of Volo-Hubs per city,” said Alex Zosel, co-Founder of Volocopter. “Once operated at scale, flying won’t be significantly more expensive than taking a cab, but it will be significantly faster.”