As cities become ever more congested, the question lingers over transport authorities and passengers alike – what is the future of urban mobility? Intelligent Transport’s Luke Antoniou spoke to Alex Zosel, co-Founder of Volocopter GmbH, at IT-TRANS to find out more about this innovative start-up company’s answer to that very question. 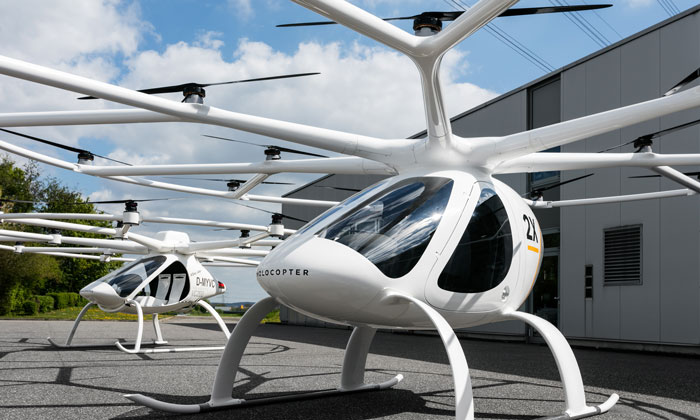 What are Volocopter’s aims and how can such a service be adopted by a city?

Our aim is to deliver a complex system for urban mobility in the third dimension. We are talking about working not only on aircraft, specifically our vertically launching, fully electrical multicopters, but on a full mobility system. Imagine you have hundreds of cable cars in your city, just without the cables. We want to provide the physical and digital infrastructure for air taxis, and we aim to be a global player in this field of mobility in the future.

We don’t want the Volocopter to simply be a toy for the wealthy. We strive for it to be a public transportation means for everybody to use. As such, it has to be affordable, and with this in mind, we have calculated it not to be much more expensive than many other forms of transport.

The most important thing in actually getting our technology into the city is to gain the acceptance and trust of the people living there. Put very simply, if people don’t like it, they won’t use it. So it has to be a comfortable means of travel, comfortable getting into and out of the aircrafts, and especially while flying – even in poor weather and windy conditions, we want people to be able to use the Volocopter for travel every day. Another consideration is the noise level; it has to be quiet. People on the street should not be able to hear it. We are working hard in all these fields.

We are forward thinkers, always looking ahead. I first had these ideas for future travel in 2011, and yet when we speak of them today they’re already mainstream. It’s amazing that things are developing so quickly. Not only is the technology evolving rapidly, but so are the perceptions of the authorities, of the companies, of the people.

Flying Taxis are accepted as a future that will come. In 2011 when we started, our co-Founder & Chief Software Advisor, Stephan Wolf, was convinced that it was possible to lift a human off the ground electrically powered, but that was just a scientific curiosity. We wrote aviation history with our first flight in 2011, making the impossible possible and now, air taxis are kind of mainstream already. People know they will come. There are significant, large companies investing in this – our shareholders include Daimler and Intel for instance. It’s not a question of if it’s coming, but when its coming.

We never thought that we’d exhibit this aircraft here [at IT-TRANS], in our home town of Karlsruhe, Germany. About 400m behind the fair halls is the field where the VC1 was flown for the first time! In the dm arena the VC200 had its first indoor flight, so this is a historic place for us. While the Volocopter is being talked about internationally, we are not recognised as much here in our home town, as we don’t make a lot of noise about it. Today is the first time we were mentioned in the regional newspapers. For us it’s an honour to stay here and present this to the world. 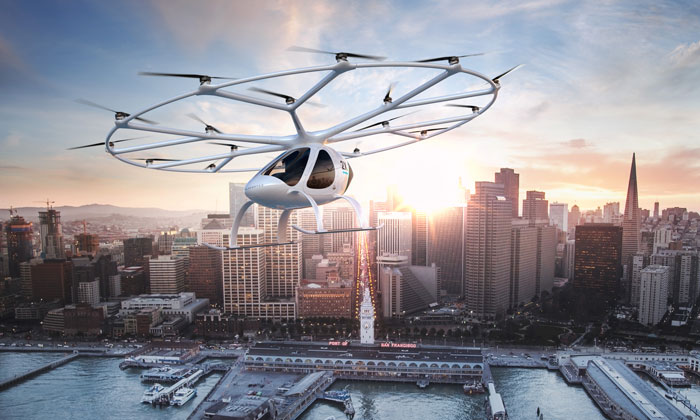 In terms of location, obviously your company is based in Karlsruhe. You’ve mentioned that it’s not your primary aim to roll it out here, so which location(s) are you looking at?

In Dubai for example we have this test trial where we are working to define the specifications for air taxis and the digital infrastructure together with the authorities. Most people have heard about this specific project, but we are also talking to many other cities who are interested. Obviously, every mega city in the world wants to be one of the leaders in mobility. They all have the same pain points– you can’t build more roads, or bridges, or tunnels, but cities need to offer more mobility and can only offer it in the ‘third dimension’. We have a lot of calls and meetings from authorities of cities. Our customers are authorities. This is unusual for a start-up company. Often it is the regulators who are halting new technologies, trying to limit what you can do, but for us they are the ones who are pushing forward. Many city authorities are really convinced by the safety and security aspects of the Volocopter, especially as an autonomous system – once it is fully developed and certified to a standard like in commercial aviation, it is really safe.

Previously when we spoke to the media, we talked about taking it slow, saying that we needed the steps like those seen in autonomous driving, i.e. levels one to five, and we looked at that. Last year, before we presented for the first time at the AERO aviation fair in Friedrichshafen, we announced that we could fly autonomously. Two weeks later we had the Dubai RTA sitting at our table to discuss test flights there.

It’s impressive that there’s that belief from those who would actually implement it, that the demand is there already…

We have a lot of enablers around us who support the Volocopter project. They are authorities, and the people who are incorporating new systems in smart cities. We are proud to be pioneers, not only for creating the Volocopter and flying the first certified autonomous air taxi, but also changing mindsets. We are making flying cars an actual reality. Karlsruhe is a hub for mobility in the world. It has seen many famous mobility inventions from the bike to the car, so we are in good company

In terms of city implementation, what kind of infrastructure is needed?

We’re talking about two different kinds of infrastructure necessary for flying taxis The first is digital infrastructure, so it’s about the air traffic management (ATM) systems we need for the lower airspace. It needs to connect drones flying, air taxis, the rescue helicopters, everything in this air space. There are a lot of players in the world working on ATMs for the lower airspace right now. We are cooperating, for example, with the RTA in Dubai to discuss what the parameters are for an aircraft to be part of an urban traffic system. When we flew in Dubai, there wasa large screen displaying the ATM of the Emirates, so you saw the position of every airliner, and the Volocopter was integrated in real time. It is a big learning curve, testing and implementing the elements to understand how to run such a system.

The other topic is the physical infrastructure: landing and take-off lots, spaces for charging and changing batteries. We believe strongly in swapping batteries as it allows the system to run faster.

Another question is where these aircrafts will be when they’re not in the air. We don’t believe passengers should wait on top of a building in bad weather to get into and out of the aircraft. We need other solutions for this. We also have a lot of other ideas, regarding the infrastructure but it is not ready just yet.

We envisage having hubs. Hubs will encompass the whole infrastructure, for charging, battery swapping, and maintenance, it will all be carried out right there. When implementing the Volocopter in your public transport system, you will start with one or two of these hubs in the city and then grow from there. Once you have a network of these hubs you will add on-demand ports. These are affordable landing spaces for companies, for stores, for organisations to have access to Volocopters at their headquarters. The hubs are the heart of the system, and the ports allow people to travel door-to-door. It’s an opportunity to create a system that can grow in the city, that can start from a few ports and then grow to a network of 40, 60, 80 hubs depending on what the people want to have. It’s very easy to see how it could grow in an existing city. It’s about developing existing infrastructure rather than developing something new. 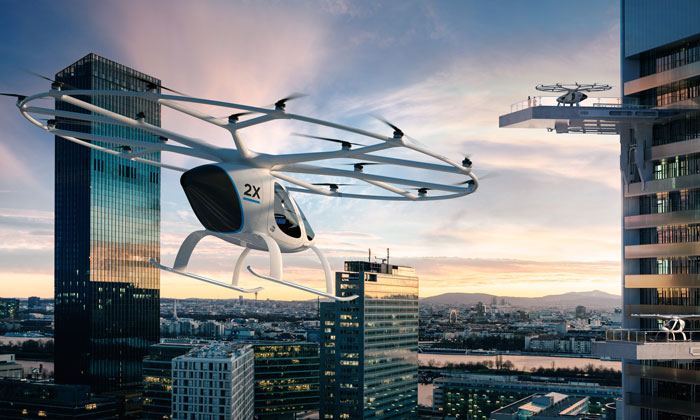 What do you think, from a passenger point of view, is the most important aspect?

I would say with certainty that the most important thing to people is safety. We need to have the trust of the people if we want to become their favourite means of transport. Equally, you could state that the authorities would not allow such a system if it wasn’t completely safe. As such, their interest in certifying Volocopter speaks volumes.

Imagine a scenario where you have 1,000 of these aircraft in the air and there is a safety alert – you will have the ability to ground all these aircraft to a safe place in just a few minutes. These are all topics you need to consider when building a flying taxi system.

The FAA 2012 Flight Safety Report, which reports and provides statistics regarding all of the accidents that have happened involving aircraft, especially helicopters, positively praised the safety potential of the Volocopter in comparison to current helicopters on the market.