Santander Cycles break record with more than 10.3 million journeys made in 2017 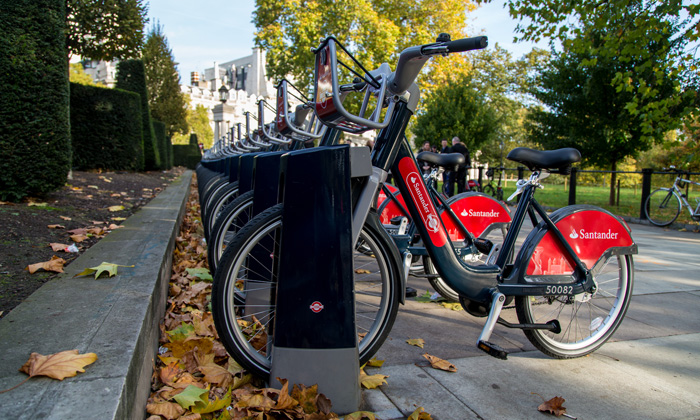 With more than 10.3 million journeys made using Santander Cycles in 2017, London’s flagship cycle hire scheme achieved a record-breaking year. October was the best month on record for the scheme, with just under 1 million hires. In total there have been more than 67 million journeys since the scheme was launched in July 2010.

Among many improvements made to the scheme this year was the introduction of a new bike. Built by Pashley Cycles in Stratford-upon-Avon, the new cycles offer riders improved handling, visibility and comfort, with a new gel saddle, lower frame, tyres with puncture prevention, new gear hub and improved front and rear Blaze lighting.

The scheme is set to start the 2018 with an extension into Brixton, with seven new docking stations providing space for up to 200 bikes.

The expansion of Santander Cycles is an example of the Mayor of London’s commitment to cycling, which has seen record levels of funding allocated. This will deliver more interlinked cycling infrastructure across the city and includes funding for new Cycle Superhighways, Quietway routes, and a new cyclist and pedestrian crossing linking Rotherhithe and Canary Wharf.

Will Norman, London’s Walking and Cycling Commissioner, said: “It’s been another hugely successful year for Santander Cycles, with record hires and the launch of the brilliant new bike. The scheme is such a great way for all abilities to cycle around our city, I’ve no doubt that their popularity will continue to increase, especially as we expand them into Brixton early next year.”

Encouraging people to cycle is one of the key components of the Mayor’s draft Transport Strategy to help Londoners lead healthier and more active lives. Santander Cycles assisted this ambition, by being the only public transport service available on Christmas Day.