Following the last of the major COVID-19 restrictions being lifted in the UK, TfL has reported that Tube and bus ridership is now regularly around 60 per cent and 50 per cent, respectively, of pre-pandemic levels. 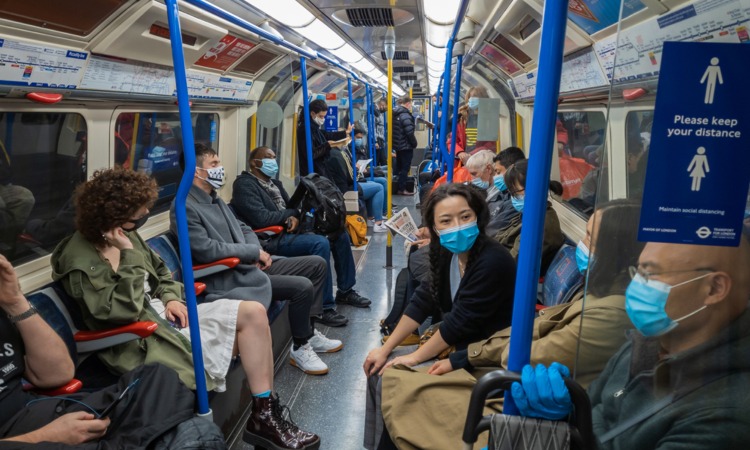 Transport for London (TfL) has released new data confirming that millions of people are now regularly using public transport again across London – highlighting the importance of the transport network to the capital’s economic recovery from the COVID-19 pandemic.

New analysis of ridership data by TfL has revealed that, since working from home restrictions were lifted on 19 January 2022, the number of people using the London Underground (Tube) during weekdays has increased by at least 25 per cent. Ridership is now regularly around 60 per cent of pre-pandemic levels during the week – up from around 45 per cent in early January 2022.

Furthermore, at weekends, ridership on the Tube is now at around 75 per cent of pre-pandemic levels and key tourist stations, such as Leicester Square, are already seeing ridership levels above 80 per cent on Saturdays. The Night Tube is also continuing to see increased ridership, with levels on the Victoria and Central line now at around 45 per cent of what has been seen on those lines prior to the pandemic.

While bus ridership has consistently been more than 50 per cent of pre-pandemic levels since April 2021, the recent lifting of restrictions has led to the overall number of journeys increasing by around eight per cent compared to early January 2022. In outer London boroughs, weekday bus ridership is now regularly at 75 per cent of pre-pandemic levels, with ridership in Hillingdon and Barking seeing levels at around 80 per cent – especially at weekends.

The recent increase further demonstrates that customers are increasingly confident in using public transport and are keen to return to the city. Across London, a near-normal service on TfL’s buses, Tubes and TfL-run rail services remains in operation, with the exception of the Northern line. Ridership is expected to continue to improve as domestic and international tourism recovers, and offices and businesses reopen during the week.

“London’s transport network is crucial for a sustainable recovery, and it’s fantastic to see passengers confidently using it as they return to workplaces and to enjoy all the city has to offer,” said Seb Dance, Deputy Mayor for Transport. “These figures also highlight how vital a comprehensive bus network is for London, not only for people getting around central London but also for those who don’t live as near to other modes of transport – with some areas in outer London nearly at pre-pandemic levels once again.”

Andy Lord, Chief Operating Officer for Transport for London, said: “It’s great to see that ridership on our services is continuing to grow in recent weeks as restrictions about working from home have been lifted. Weekday Tube ridership is now around 60 per cent of pre-pandemic levels, and at weekends is even higher – reaching three quarters of normal demand at certain times.”

Customers are also reminded that face coverings remain mandatory on any TfL service or station as a condition of carriage, unless they are exempt. Those who do not comply could be prevented from entering the network or asked to leave TfL services. TfL’s enhanced cleaning regime also continues to ensure that the transport network is cleaner than ever. Trains, trams, buses and stations are cleaned with hospital-grade cleaning substances that kill viruses and bacteria on contact and provide ongoing protection.