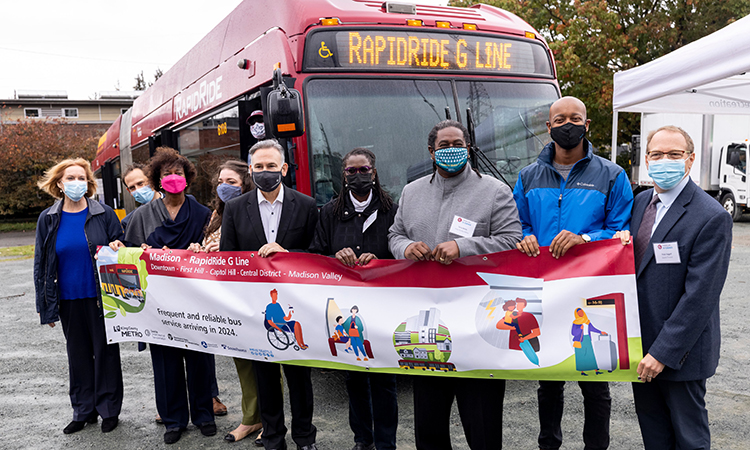 This bus rapid transit (BRT) project is one of Seattle’s biggest projects within the Levy to Move Seattle. When the RapidRide G Line opens in 2024, it will connect some of Seattle’s densest neighbourhoods with frequent, reliable transit. The improved bus route will also connect to transit across the region, including light rail, ferries and regional bus lines.

The Madison – RapidRide G Line is a partnership between King County Metro, the City of Seattle and Sound Transit. It will create a frequent and reliable public transportation line between 1st Avenue and Martin Luther King Jr Way. The route will serve dense neighborhoods in downtown Seattle, First Hill, Capitol Hill, the Central District and Madison Valley. It will connect people to hospitals, schools and universities and businesses, as well as to dozens of bus routes, the First Hill Streetcar, the West Seattle and Vashon Water Taxi at Pier 50 and ferry service at the Colman Dock Ferry Terminal.

The project will build new sidewalks, repave the street and change the lane layout to make the bus more reliable, accessible and easier to get to. The City of Seattle will build curb ramps, add streetlights and build five new traffic signals with crosswalks to make it safer and more comfortable for people to get to and from bus stops.

The project would not have been possible without the support of Seattle voters who passed the Levy to Move Seattle in 2015. One of the ways in which the Levy to Move Seattle amplifies the value of tax dollars is by helping to leverage funding from other regional, state and federal transit agencies, making it possible for King County Metro to accomplish more than would have been possible with local funding alone.

The Federal Transit Administration is contributing $80.5 million to the $133.4 million project. This includes $10.9 million from President Joe Biden’s American Rescue Plan, $59.9 million from the Small Starts Grant programme and another $9.7 million from the Congestion Mitigation and Air Quality Improvement Program.

Sound Transit is also contributing up to $35.8 million to the project, as part of a Capitol Improvement Program agreement with King County Metro. This project will be one of the first of many Sound Transit 3 commitments, which will be completed in the coming years.

The City of Seattle Department of Transportation (SDOT) will work to build the project as efficiently as possible while maintaining access and mobility. The work will be done in sections along the project area and work will generally occur on weekdays between 07:00 and 17:00. At least one lane of traffic will be kept open in each direction most of the time, but there will be some times crews have to close intersections, typically on weekends or overnight.