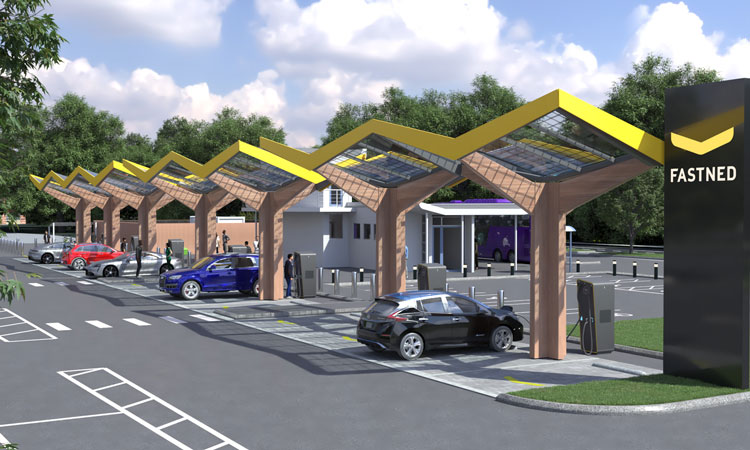 Pivot Power and Oxford City Council have teamed up with Fastned, Tesla Superchargers and Wenea to deliver Europe’s most powerful EV charging Superhub in Oxford.

The hub, initially featuring 38 fast and ultra-rapid chargers in a single site, with up to 10MW of power on site, will scale up to help meet the need for EV charging in the area for the next 30 years. It is the first of up to 40 similar sites planned across the UK to help deliver charging infrastructure needed for the estimated 36 million EVs by 2040.

Fastned will initially install 10 chargers at the Superhub with 300kW of power, capable of adding 300 miles of range in just 20 minutes for up to hundreds of EVs per day. The station will be powered by 100 per cent renewable energy, partly generated by the company’s trademark solar roof, and all makes and models of EVs will be able to charge at the highest rates possible simultaneously. Chargers will be open 24/7, requiring only a simple contactless payment.

Unlike any other UK charging hub, the site, at Redbridge Park & Ride, is directly connected to the high voltage national electricity grid, to provide the power needed to charge hundreds of EVs at the same time quickly, without putting strain on the local electricity network or requiring costly upgrades. This innovative network, developed by Pivot Power, has capacity to expand to key locations throughout Oxford to meet mass EV charging needs, from buses and taxis to commercial fleets.

The announcement is a key milestone in the completion of Energy Superhub Oxford (ESO), due to open later this year. The £41m world-first project, led by Pivot Power, integrates EV charging, battery storage, low carbon heating and smart energy management technologies to support Oxford to be zero carbon by 2040 or earlier.

Oxford is set to launch the UK’s first Zero Emission Zone this August, where vehicles are charged based on their emissions, with EVs able to use the zone for free.