The Italian city will benefit more than most from a lack of overhead wires thanks to its UNESCO World Heritage status. 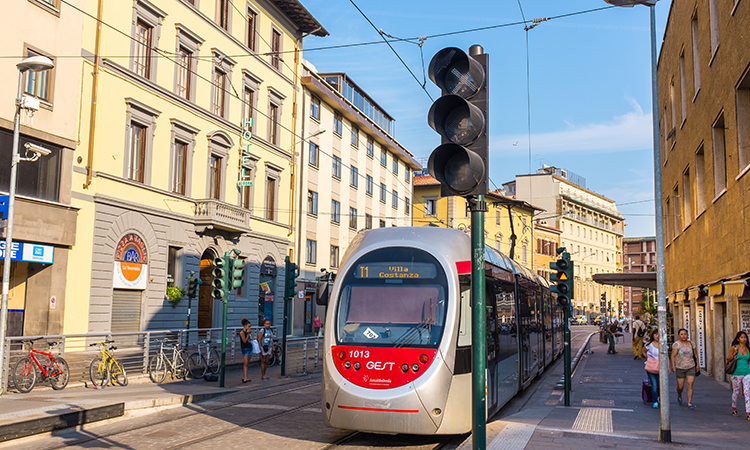 Hitachi Rail has tested a battery-powered tram in the Italian city of Florence, which it says can save millions on installing overhead wires.

Yet Hitachi claims that battery-powered trams offer an opportunity to run high capacity public transport through city centres while reducing the visual impact on historic streets. This is perhaps of most use in the Tuscan capital, which is widely considered as one of the most beautiful cities in Europe and has been a UNESCO Heritage Site since 1982.

“This is a key milestone as we pioneer this new technology that allow us to work with our customers to reduce infrastructure costs while still offering environmentally-friendly public transport,” said Andrea Pepi, Head of Sales and Projects Italy at Hitachi Rail

“We hope this successful trial in Italy creates new opportunities for us across the world.”

The trial involved the installation of battery packs on an existing Sirio tram, which covered a section of the line under battery power.

According to Hitachi, the solution allows power to be returned to the batteries when the train brakes, reducing the overall amount of energy consumed and protecting the environment.

Mayor of Florence Dario Nardella added: “Battery-powered trams can revolutionise this type of service within cities.

“Public transport, especially in historic centres, will have to be less impactful and increasingly sustainable.”

Elsewhere in the business, Hitachi recently announced the trial of a battery train in the UK, which will run on the Great Western Railway line between Penzance and London. Batteries will be added to intercity trains already running on the line, which is only partly electrified and therefore requires diesel power for a large section of it. Hitachi says fuel usage and carbon emissions by 20 per cent.