Pick-up and drop-off points will be situated in three different locations in Lahti, with additional ski trails also laid down to make travelling on skis even easier for Lahti residents. 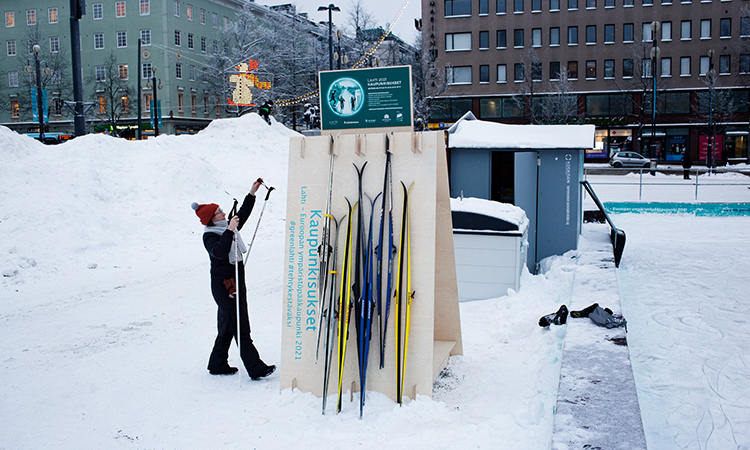 One of the three pick up/drop off locations in Lahti

You’ve heard of bike-sharing, scooter-sharing, and even moped sharing. Now, the Finnish city of Lahti has begun rolling out its ski-sharing scheme in a bid to cut down on carbon emissions.

The scheme will work in similar fashion to bike- and scooter-sharing programmes already in place around the world, with three pick up and drop off points located in the city – two in the city centre and one near the Salpausselä ski stadium.

The rollout is part of a bigger push to drive down emissions as part of Lahti’s tenure as European Green Capital in 2021.

“City Skis work the same as city bikes: the skis can be borrowed from a ski point, where they should be returned to after use,” Saara Vauramo, programme director of Lahti European Green Capital, told The Independent.

“We hope the City Skis can bring joy to locals during the coldest season – and at the same time, we want to promote emission-free ways of getting around the city all-year round.

“As the current European Green Capital and the unofficial skiing capital of Finland, we want to save our winters and motivate people to make climate-friendly choices.”

Lahti is already a city mad about skiing – it has hosted the FIS Nordic World Ski Championships seven times and already has hundreds of kilometres of ski trails in place for locals to get around. In addition, ski trails have been set up in the city centre to coincide with the ski sharing launch.

A more traditional bike-sharing scheme is on the way later this year too, however: “We have seen a clear demand for a bike-sharing system,” said Anna Huttunen, Project  Manager of Sustainable Mobility.

“As a traditional skiing city, we wanted to kick off our year as Europe’s Green Capital in a good-humoured way by gliding through the market square on skis.”