First Bus retrofits 1,000 buses in its UK network to comply with Euro VI emission standards as it seeks to operate a zero-emissions fleet by 2035. 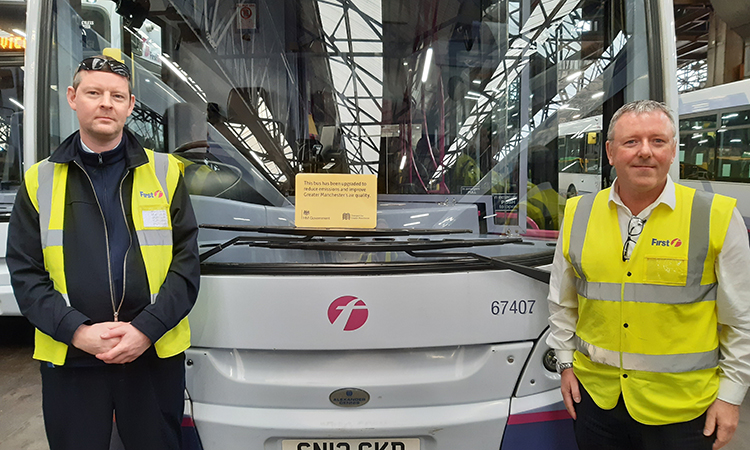 The 1,000th retrofit was completed in Manchester.

First Bus, one of the UK’s largest bus operators, has announced that it has completed the refit of 1,000 buses (around 20 per cent of its fleet) across its UK network with new exhaust systems and e-Fans to comply with Euro VI emission requirements.

First Bus says the £16m retrofitting programme has been successfully delivered in partnership with the Joint Air Quality Unit of the Department for Environment, Food and Rural Affairs (Defra) and the Department for Transport (DfT), Transport Scotland, and other local authorities.

The milestone has been completed in just over two years, with the 1,000th bus was retrofitted in Manchester. Alongside scheduling challenges due to the COVID-19 pandemic, First Bus says it has worked hard to ensure that operations have continued with limited interruption to customers during the retrofitting programme.

“We are committed to doing everything we can to make our buses as environmentally friendly as they can be for the communities we serve,” said John Dowie, First Bus Strategy Director.

“We’re proud to have achieved this milestone at the turn of the year, highlighting the ongoing work of our engineering teams. We estimate that each retrofit reduces air pollutants and harmful emissions by up to 95 per cent, and this makes a considerable positive impact to air quality for our towns and cities. Bus services will be a fundamental part of economic recovery as the UK starts to emerge from the pandemic.”

The milestone has been reached at a critical point for First Bus, following their commitment to operate a zero-emission bus fleet by 2035, and their pledge not to purchase any new diesel buses after December 2022.

In the past 12 months the operator has introduced several new bus models powered by diesel alternatives to their UK fleet. These include hydrogen-powered, bio-methane-fuelled, and electric buses. Retrofit investment is an important step which ensures the vehicles’ full lifecycles are utilised while reducing emissions. This helps support longer term clean air ambitions.

Jon Tivey, the newly appointed Head of Environment at First Bus said: “First Bus has been on the trajectory towards a zero-emission bus fleet for a few years and I’ve joined at an exciting time for the business and the industry as we look to decarbonise public transport and significantly contribute to the green recovery.

“The retrofitting milestone is a great reminder that the environment is an ongoing focus for the business. The retrofitting programme is one way in which we can significantly reduce harmful emissions on our roads.”