With bus services hit hard by the COVID-19 pandemic, many in Greater Manchester have questioned if they would be better off in the hands of city authorities. 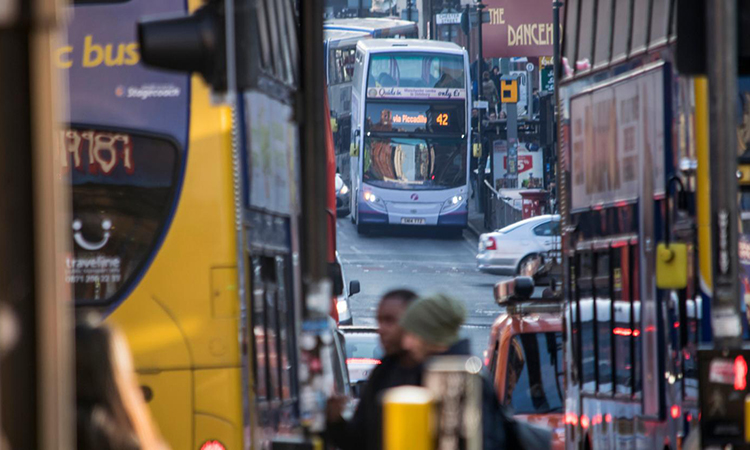 Manchester's bus services could soon be under the control of the city authorities as franchise scheme is under consultation.

Greater Manchester is preparing to hold a further consultation on its proposals to reform the bus market following work to understand the potential impact of COVID-19.

At a meeting on 27 November, Greater Manchester Combined Authority (GMCA) will be asked to give the go-ahead to a consultation on the potential impacts of OVID-19 on both Greater Manchester’s bus market and its proposed franchising scheme.

This follows an earlier consultation, held between October 2019 and January 2020, on the introduction of the proposed franchising scheme. A final decision on the scheme was planned for spring 2020, but this was delayed due to the impact of Covid-19.

Under franchising, bus services would be brought under local control. GMCA would coordinate the bus network based on the services passengers need and would also coordinate investment in the bus market. The bus operators would be contracted by GMCA to run the services.

Over 8,500 individuals and organisations from across Greater Manchester and beyond responded to the previous consultation, with eight-out-of-ten respondents, who answered the relevant question, supporting the proposed franchising scheme., according to GMCA.

In June, GMCA noted the results of the consultation and asked that, before a final decision was made, Transport for Greater Manchester (TfGM) produce a COVID-19 Impact Report considering how the pandemic had affected the bus reform process.

Before Covid-19, bus usage was already falling in Greater Manchester, which was one of the reasons why GMCA was considering the proposed franchising scheme.

The pandemic has had a significant impact on bus usage with passenger levels dropping by around 50 per cent according to the authority. However, bus patronage did recover more quickly than other modes of transport during the pandemic, demonstrating how vital bus services are to those who rely

However, the proposed franchising scheme would mean more of the financial responsibility and risk would belong to GMCA and the public sector. The potential longer-term impact of COVID-19 on bus usage may also mean GMCA is faced with difficult choices about the network to manage this financial risk and this may impact on the revenue GMCA would receive under franchising.

Working alongside Vivacity Labs, TfGM is hoping that the new smart junctions will help reduce congestion, as well as protecting vulnerable road users such as cyclists and pedestrians.

Deputy Mayor Sir Richard Leese remained in favour of a franchising scheme: “Throughout this pandemic, buses have proven themselves to be a critical lifeline for people who have needed to get to work, to help other people or to access essential services.

“But before COVID-19, bus usage was already falling in Greater Manchester, and the pandemic has caused passenger levels to drop even further.

“If bus usage remains low and nothing is done to reform the market, services may be further reduced, which may mean the public sector will have to provide more funding to keep essential services running, especially for Greater Manchester’s poorest and most vulnerable who depend on them – but we currently have no control and limited oversight over any changes to services.

“That is why, now more than ever, we need our buses to work for the people of Greater Manchester.

“The evidence suggests that the proposed franchising scheme is still the best way to achieve this and to deliver a joined-up public transport network with simple fares and ticketing and the improved customer experience that Greater Manchester’s passengers deserve. And it needs to proceed now so it can be an important part of our recovery from the pandemic.”

“We want to ensure everyone in the city-region and beyond has a chance to have their say on how COVID-19 has affected our proposals, so next week GMCA will decide whether to proceed with a further consultation.”

The outcome of both consultations would then be considered as part of the final decision by the Mayor of Greater Manchester, Andy Burnham, on whether to implement the proposed franchising scheme. The decision is anticipated to take place in spring 2021.