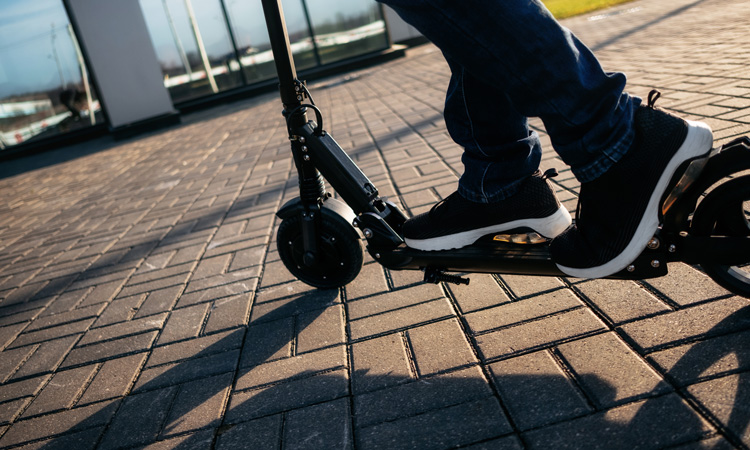 The first trial of e-scooters in the UK has begun today (13 July 2020) across Teesside, Darlington and Hartlepool after a successful campaign by Tees Valley Mayor Ben Houchen and a partnership with UK based e-scooter company Ginger.

The change in legislation means approved, shared e-scooters will be permitted where bikes are allowed – on roads (not motorways), cycle lanes and tracks where possible. Riders must be over 18 years old, have at least a provisional driving licence and helmets are highly recommended.

Mayor Houchen had previously called on the Government to make the region a trial area to determine whether the battery-powered vehicles could be used more widely, as a clean energy, socially distanced alternative to other forms of transport following the coronavirus outbreak.

The trial is now underway with an initial 50 e-scooters in operation. When the pilot is at full strength up to 500 of the battery powered vehicles will be on the region’s roads and cycleways over the next 12 months.

Parking location will initially be strictly geo-fenced so users must leave their e-scooters in these locations at the end of the ride, with Ginger responsible for the charging of the scooters. As the trial progresses, Ginger will look at introducing on-street charging and docking locations.

Mayor Houchen said: “Teesside, Darlington and Hartlepool are leading the UK in new, clean and innovate technologies. E-scooters are a part of that. I have been a big fan of e-scooters for a very long time, and when the Government announced their plans to fast track their introduction, it was obvious that our region should be the first trial area. So, I am thrilled that the UKs first trail on e-scooters on UK roads will take place across Teesside, Darlington and Hartlepool.

“The move shows that Government is just as passionate as I am about clean innovative forms of travel and making e-scooters widely available as a clean energy, socially distant mode of transport which will help get our workers moving safely again and give our businesses a boost following the coronavirus pandemic.

“It has been fantastic working with a forward-thinking company like Ginger to make this trial a reality, and to be able to do it in such a short period of time shows just how committed they are to making e-scooters more widely used. I am also pleased that by working together we have been able to make using e-scooters cost effective with the price of a ride competitive with other forms of public transport.

“We are already a forward-thinking region, at the forefront of clean energy and developing the technologies of the future with the Net Zero Teesside carbon capture, storage and utilisation scheme. Thanks to this decision, we’ve been rightly recognised for our innovation and in how we can lead the UK in doing things differently.”

Paul Hodgins, CEO of Ginger, added: “I am delighted to be introducing Ginger e-scooters to the Tees Valley as part of the pioneering Government scheme to trial this exciting new form of transport. I strongly believe micro e-mobility offers unique solutions to today’s transport challenges. It is great that the Tees Valley Mayor and the Transport Secretary are making this public pilot the first in the UK, choosing to work with Ginger, a British innovator and transport provider.”

The Department for Transport (DfT) has also released the following guidelines for the UK trials: